A settlement has been announced in a lawsuit filed by two student passengers against their flight instructor after a 2004 plane crash. The plaintiffs alleged the pilot knowingly flew in icy conditions. The plane crashed after the pilot tried to land to remove ice on the plane.

The National Transportation Safety Board determined that the flight instructor's inadequate planning likely caused the crash especially because he knew about icy conditions and that the aircraft did not have anti-icing equipment. The plane was flying from Des Moines to Madison when it stalled and crashed into a field near the runway.

In a different lawsuit, the family of a woman who died in a commuter plane crash three years ago has settled its wrongful death lawsuit. The family alleged that the crash was caused by carelessness on the part of American Airlines and the company that operated the plane. Thirteen people died in the crash, which was blamed on pilot error, poor professionalism and fatigue. 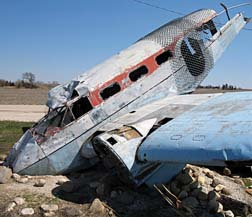 Meanwhile, two families have filed a lawsuit against Cessna Aircraft after a plane crash killed a pilot and nine passengers. The lawsuit alleges that Cessna Aircraft knew about major defects in the Cessna 208B including a mis-calibrated stall-warning system. Those defects may have caused the plane crash. Plaintiffs allege that Cessna lied in order to get the plane certified to fly in icy conditions.

More News
Not all crashes result from pilot error or mechanical malfunctions. In some cases, the plane crash can be caused by faulty instructions given by air traffic controllers. In 2006, the parents of a young man who was killed in a plane crash were awarded $3.4 million in their plane crash lawsuit, filed against the U.S. government. The suit alleged that the air traffic controller ordered a plane with the call sign "4PA" to decrease altitude. That order was meant for a different plane, but the victim acknowledged the order, decreased altitude and crashed into a mountain.

The plaintiffs alleged that the FAA's employees were negligent in not differentiating between two planes with the same call sign ending and for not recognizing that the wrong plane acknowledged the order.

It is not just people in the plane who can be injured by plane crashes. When planes crash near cities and towns, those on the ground can suffer serious injuries as well. When Yankee pitcher Cory Lidle's plane crashed into a building, residents of the building lost personal property and suffered emotional damage. At least one of the residents of the building filed a lawsuit against Lidle's estate.