We are expected to make split-second decisions many times in our life and luckily for the majority of us, our decisions will not result in a plane crash or other catastrophe. Pilots, flight crew, maintenance workers and air traffic controllers are all required to make many, many decisions in a single day. Sometimes, they make the wrong decision or take the wrong action—referred to after a plane crash as "human error." Sadly, the results of that human error can be tragic. 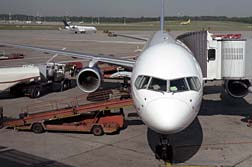 According to the Federal Aviation Administration (FAA), the most common of all accident themes is human error, which is involved in some form in virtually all plane crashes.

Human error refers to errors that are shown to have caused, or substantially contributed to, an accident. The error can be on the part of any number of people, including flight crew, maintenance crew and air traffic controllers. It can entail a wrong decision on the part of flight crew, a distraction that results in a flaw being overlooked or a failure to take appropriate action in an emergency situation. That error can also be the result of poor judgment, a lack of training or even fatigue. However, no matter who commits the error, or why the error occurs, the result can be devastating.

One example of the deadliness of human error was USAir Flight 427, which crashed on September 8, 1994, killing all 132 passengers and crewmembers. The crash was the result of a loss of control of the plane after it encountered the wake of a preceding plane. The crew's actions to regain control actually caused the plane to stall. According to the FAA, "A factor in the accident was an apparent lack of flightcrew understanding and/or training relative to exposure to high angles of attack and upset recovery."

The FAA reports that the pilot's attempts to bring the nose back to a level altitude caused the plane to stall. Complicating matters, it appears as though the flightcrew did not attempt to recover from the stall. The FAA found that there was a lack of understanding about the inflight upset recovery. "This lack of understanding may have been a factor in this particular flightcrew unintentionally stalling the airplane and being unable to recover once the stall was fully developed."

More recently, human error was reportedly a contributing factor in a plane crash in September that took 4 lives and left 2 people seriously injured. Flight crew on that plane thought they had blown a tire on the runway and apparently attempted to abort their takeoff. However, some industry experts say the flight crew should have continued with takeoff and burned fuel before attempting to land, rather than aborting their takeoff.

According to a report in USA Today, human error remains an important issue in airplane safety. "Errors by pilots or maintenance workers cased all nine fatal airline accidents in the U.S. since 2000, according to National Transportation Safety Board data."

More PLANE CRASH News
The issue of human error is of high enough concern that the National Transportation Safety Board has put a goal of reducing accidents and incidents caused by human fatigue in the aviation industry on its list of most wanted transportation safety improvements. "The Safety Board has long been concerned about the effects of fatigue on persons performing critical functions in all transportation industries including flight crews, aviation mechanics, and air traffic controllers…However, the FAA has taken little if any action directly related to revising existing regulations and work scheduling practices."

It is a well-known fact that fatigue reduces a person's reaction time and judgment while increasing the risk of an accident. With human error being one of the most common themes in aviation accidents, it stands to reason that the airline industry and the FAA would take steps to reduce worker fatigue, thereby reducing the risk of accidents related to human error. However, if the NTSB is correct, that has not happened at all. The problem, of course, is that everyone on a plane depends on those in charge of the plane to be able to make split-second, life-saving decisions. When they can't, the lives of those on the plane are put in jeopardy.