Tulsa, OK: The September 5th plane crash in Oklahoma that killed five people not only ended the lives of four from one family, but also tragically ended a love affair that began in high school. Dr. Stephen Lester and his wife Dana, both 48, perished together with two teenaged daughters Laura, 16 and Christina, 13. A family friend, Dr. Kenneth Veteto—who was 50 and like the others in the aircraft was from Tulsa—also died in the airplane crash. 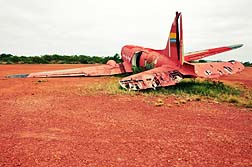 According to a story by the Associated Press (AP) appearing in the Olympian, the six-passenger Piper PA-32 encountered heavy fog while en route to Dallas when it hit a guide wire from a communications tower and crashed violently into the ground.

"The wings came off. The engine came off," said Oklahoma Highway Patrol Lt. George Brown. "When it hit, it rolled. It did catch fire. It rolled at least a couple of times, ejecting the occupants." AP reported that the doomed aircraft took off from Jones Riverside Airport at Tulsa around 10:37am Saturday before encountering heavy fog and snagging the communications tower guide wire about a half hour later. "Because of weather conditions, there was a low cloud ceiling that obscured the communications tower," Brown said. "It's apparent that the pilot did not see this tower."

According to the US Federal Aviation Administration (FAA) the Piper aircraft had been manufactured in 1976 and was registered to Stephen Lester, of Tulsa.

More PLANE CRASH News
Steve and Dana Lester's love blossomed in high school, according to a story from KJRH Channel 2 in Tulsa. An anesthesiologist, Lester was constantly flying his plane across country teaching patients about pain management. A relative told KJRH that Lester, the presumed pilot, knew the route well.

The Lester's two other children were not on board the plane when it crashed Saturday.

Eyewitness Jeremy Richards told Tulsa World that he was at the park for a motorcycle rally when he heard the crash. "I turned around to look and I see something flying through the air. I realized later that it was a body."

He and a friend, Mike Walker, were only about 100 yards away and ran to the plane, the front of which was engulfed in flames.

"Nobody was able to be saved. Nothing could be done," Richards said.

Dr. Lester was the principle in Pain Care Associates, a pain management practice. Family friend Dr. Kenneth Veteto was an internist at the Warren Clinic in Tulsa. He is survived bi his wife, a daughter and a son.