Tyler, TX: It's one of those stories that makes you think, 'Oh…my…God.' A plane crash: a small plane, carrying a handful of passengers that goes down. In many cases there are fatalities, but luckily in this case there were no deaths. Just injuries, the fear and the emotional fallout that comes with being in a plane that falls from the sky.

And then there is news that the pilot wasn't licensed to fly. 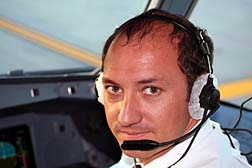 It was July 26th when a Cessna 172 crashed near Athens Municipal Airport in East Texas. Three people were injured, but none seriously. What has everybody talking, however, is the fact that pilot Paul Kaemmerling is alleged to have had only a student pilot certificate when he took his passengers up into the sky. Worse, that certificate is said to have expired two years ago.

While the National Transportation Safety Board (NTSB) continues to probe the crash, investigators have determined that there was nothing mechanically wrong with the plane. Thus, there likely would have been other issues that factored into the crash of the plane, not the least of which was the alleged inexperience of the pilot—inexperience suggested by the failure to obtain a proper pilots' license.

In the end, who knows how many hours the pilot may have flown? He may have flown few, or several. However, he lacked the piece of paper that would have otherwise qualified the man as a pilot, and "it may be that a contributing factor in the crash is that he did not have the proper training to fly," said Jennifer Kaiser, an investigator with the NTSB, in comments published in Sunday's editions of the Tyler Morning Telegraph.

However, questions remain. How could this happen? Were the passengers aware that the pilot of their plane was unlicensed? Would a requirement for pilots to present, or post their license before each flight, workable and advisable? And even though the occurrences of pilots flying without proper certification is rare given the sheer number of flights per day, the Federal Aviation Administration (FAA) does admit that it happens somewhere in the United States several times a week.

FAA spokesperson Roland Herwig was reported as saying that not every pilot is checked, and he could not go into details about how, or when ramp checks are carried out due to security issues. However, he does maintain that the system is safe.

It has been reported that any problem with unlicensed pilots is greater in the southern, less-densely populated areas of the country, where ranchers will often commute in light aircraft from ranch to ranch. Such areas, and such flights, it has been reported, are not monitored. "You can fly from ranch to ranch and no one ever knows," said Civil Air Patrol Captain Arthur Woodgate, in comments published by the Associated Press. "There is no way to regulate that because there is no way to tell, especially if you're flying under the radar. If you do that then no one knows you're there."

US Rep. Bennie Thompson serves as Chairman of the House Homeland Security Committee, and indicated that the panel expects to address general aviation issues in the coming weeks.

In the meantime, it is still possible, it seems, to go up into a plane with an uncertified pilot at the controls. And when that happens, any difficulty encountered in the air must be handled by a pilot lacking the proper certification, which assumes a recipe for disaster—especially if there are other passengers on the plane. Even an uncertified pilot, who flies alone, is risking the lives of those on the ground if the plane encounters a problem while flying over a densely populated area.

More PLANE CRASH News
Thankfully, according to those in the industry, this is less likely to happen in more urbanized areas, than in the rural south. The problem is that it happens at all.

It is not known if the passengers injured in this plane crash will sue the pilot for negligence, although on the surface one would assume they have an excellent case.

Beyond that, is trust that passengers have in their pilots, and the responsibility a pilot has to himself, his passengers and those on the ground.

Any obvious breach, such as the foregoing, will most assuredly take flight through the courts of law.