Tobacco Industry Legal Advantage Up in a Puff of Smoke

The plaintiffs have been waiting patiently for 12 years, but a lawsuit originally brought in 1997 citing the tobacco industry for an alleged campaign of "deceptive advertising and misleading statements" concerning cigarettes, addiction and disease can finally go ahead. 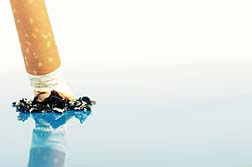 A ruling May 18th by the California Supreme Court paved the way for the long-running class-action effort to finally proceed, after the process was earlier halted by a lower court.

The allegation is that the various defendants engaged in a decades-long campaign promoting the tobacco industry and tobacco products that is alleged to have been misleading and deceptive—and came at the expense of the health of American users of tobacco products.

The class action was proceeding when a new law was voted onto the books in the State of California that made it more of a challenge to pursue a class-action in the state. The law, which came into effect in 2004 according to Reuters, was designed to curb what some considered excessive class-action lawsuits against corporations.

For a class-action to proceed in California after 2004, according to the statute, plaintiffs would have to demonstrate personal damage or loss of funds directly attributable to the alleged fraud.

It can be assumed that the defendants in the tobacco class-action saw a potential loophole and lobbied to have the class-action decertified. The California Court of Appeal backed their request in light of the new law.

Lawsuits could still proceed, however only on an individual basis. It would not only be more costly for each individual plaintiff, the change would also diminish the impact of the legal action overall.

The win on the part of the tobacco industry was short-lived however, when the Supreme Court of California reversed the lower court's ruling by a majority verdict of 4-3.

"We conclude that standing requirements are applicable only to the class representatives, and not all absent class members," the court's ruling stated. The interpretation of the ruling is that only a handful of plaintiffs leading the suit must show proof of damage and deception, rather than all plaintiffs in the suit.

It's a very good day for the original plaintiffs of the class-action who have been waiting patiently since 1997 for the issue to be resolved—and for those who have been harmed either financially, or have seen their health and that of their loved ones impacted negatively as a result of the statements, promotions and claims of the named defendants from the tobacco industry that were alleged to be false and misleading.