What were they thinking? William Cross, who filed suit against the City of Wheeling, West Virginia and Anthony Wayne Oil Corporation after suffering a personal injury from the uneven pavement of a handicapped ramp, isn't even handicapped.

But imagine the difficulty a handicapped person may have experienced attempting to negotiate the ramp in question, if an able-bodied individual slipped and fell? 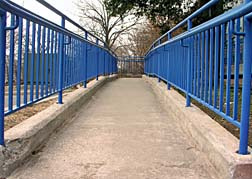 This accident could have been much worse, and speaks to product liability. Pavement in a public area is a product provided by a municipality in concert with a paving contractor for the use of its citizens and the general public. Pavement that is uneven, or is patched improperly, could be viewed quite correctly as a defective product.

It was January 15th of last year when William Cross, a service technician for Konica Minolta Medical Imaging, was dispatched to the Radiology Department at Ohio Valley Medical Center (OVMC) by his employer for a service call, and had parked at the Center Wheeling Parking Garage, located just across the road from his destination.

According to court documents filed August 1st in the US District Court for the Northern District of West Virginia, Cross chose to exit the garage by walking down a handicap ramp that seemed to be in a state of disrepair and appeared to be improperly patched, allegedly producing uneven pavement. The plaintiff claims to have tripped, slipped and fallen as the result of the uneven pavement, leaving him with a severely twisted left ankle that was further compromised by having the bone break the skin. Cross claims to have lay helpless for 30 minutes before finally being rescued and evacuated across the street to the OVMC.

There, the plaintiff was diagnosed with a trimalleolar fracture of the left ankle, an injury that required surgical intervention for the placement of a plate and screws into his ankle by surgeons at OVMC, where he remained for three days.

Following surgery he was diagnosed with osteoarthritis of the tibiotalar joint and reflex sympathetic dystrophy or causalgia. Cross will likely suffer permanent burning pain, often the byproduct of a limb that has seen its peripheral nerve traumatized.

The plaintiff claims that he spent the next year unable to walk unaided, and was reduced to using a walker until surgery this past January to remove the implements from his ankle. He was unable to work for 10 months.

The plaintiff claims that as a direct result of the defendants negligence he has suffered past, present, and future medical expenses and out of pocket expenses; loss of earnings and enjoyment of life's pleasures; and severe physical, psychological, and emotional pain and suffering. Cross is seeking a trial by jury, and seeks compensatory damages in excess of $75,000 from the City of Wheeling and $75,000 from Anthony Wayne Oil Corporation, as well as interest and costs.

More DEFECTIVE PRODUCT News
The plaintiff is of the view that the City of Wheeling and Anthony Wayne Oil Corporation of that City were negligent, and should have known about the uneven pavement, especially given the fact that it had been patched and, it is alleged, haphazardly at that.

It should be noted that there was no report as to whether or not Cross' suit made any reference to the moral responsibility of the City of Wheeling, and its paving contractor, to provide a safe, and obstruction-free pathway for the handicapped, and persons with physical disabilities. One can imagine, given the difficulty Cross claims to have experienced in this instance, how much more dire the situation could have become for an individual in a wheelchair, a scooter, or a walker.

Perhaps this could be an invitation to a handicapped rights group to take up the cause for them, in court, with the help of a defective products attorney.