If your desk is close to a printer—particularly a Hewlett Packard printer—you might want to consider moving. Current research suggests that tiny particles, called ultrafine particles or particulate (UFP) from sources such as printer toner could be absorbed into the lungs and cause eye, nose, throat and lung irritation. Furthermore, in recent studies UFPs have been linked to heart problems and lung disease. 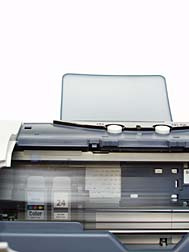 An Australian study identified a number of Hewlett Packard (HP) printers as high emitters. Needless to say, HP denies these claims. The study, published in the August issue of the American Chemical Society's Environmental Science and Technology Journal, says that printers are a potential source of indoor pollutants producing volatile organic compounds and ozone as well as a variety of particle emissions. Lidia Morawska, an author of the study, said that many health problems, from cardiovascular problems to cancer, have been blamed on the ultrafine particles. "Even very small concentrations can be related to health hazards," she said. "Where the concentrations are significantly elevated means there is potentially a considerable hazard."

Closer to home, the US Environmental Protection Agency (EPA) has increased its efforts in identifying health effects brought on by UFPs. Two years ago, the agency awarded $40 million to five research centers to identify the sources of particulate matter most responsible for health problems and study high-priority issues related to the effects of airborne particles on human health.

In March 2006, one of these studies conducted by researchers at John Hopkins University found that short-term exposure to fine particulate matter increased hospital admissions for cardiovascular and respiratory diseases among the study's participants. The conditions reported in the study included heart failure, chronic obstructive pulmonary disease and respiratory infections.

Pinchin Environmental, one of Canada's largest environmental, health and safety consulting firms, tested offices printers in three different locations. The tests discovered that 27 percent of the printers emitted UFPs in high quantities, and one printer was found to emit levels of UFP more than 70 times higher than those found in the ambient air. (High emitters are printers that emit more than 10 times the UFP than was found in the ambient air.)

In a CBC News report, Stephan van Eeden, associate professor, department of internal medicine at the University of British Columbia, said that, "These small particles remain airborne for much longer than the larger particles that tend to settle out, and also when you breathe them in, they tend to penetrate much deeper into your lung." He also told CBC News that "some of these particles are so small that they can actually penetrate into the blood stream and affect blood vessels and the heart."

According to van Eeden, the amount of small particles inhaled if you sit anywhere from two to three feet near a printer is the equivalent of sitting next to a person that smokes.

If you suffer from irritation or disease and work near an HP Printer, please contact a lawyer involved in a possible [Lawsuit] who will review your case at no cost or obligation.
Request Legal Help Now

Posted by
roberto muscio
on January 13, 2011
the toner is cancerous.i desease cause tone in my profession.