Unpaid Overtime Goes to the Dogs

It can be an unpaid overtime violation involving thousands of people, or the stiffing of just a few—but in the end the unfairness is the same. According to general labor laws workers should be paid for the work they perform, regardless of where it is or when it is. And when you work more than your allotted hours, there should be additional compensation for that. 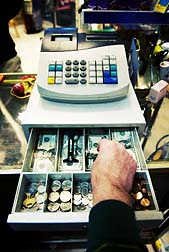 Take the case of Casey's. The operator of 1,474 convenience stores located in Iowa and 6 other states agreed on May 8th to a $12.1 million settlement with regard to two class-action lawsuits concerning overtime pay.

It was two years ago this month that the Iowa-based chain was sued by two assistant managers alleging their employer failed to pay them overtime owed to them, even after persistent complaints.

Eight months later the chain was sued a second time by cooks and cashiers for alleged violations involving the denial of mandatory meal and rest breaks. The January, 2008 lawsuit also alleged that employees were asked to perform tasks prior to their scheduled shifts beginning and after their scheduled shifts had ended.

The settlement will cost Casey's $11.7 million divided amongst the plaintiffs, class members and their lawyers—together with about $400,000 in 'related settlement expenses.'

The Casey's case is but one example of a large-scale dispute. Compare that to the $115,056 in back wages that will be paid to dog handlers at Honolulu International Airport.

The award is for unpaid overtime as required under the Fair Labor Standards Act. Akal Security Inc. is a company based in New Mexico that provides federally certified explosive-detection dog handlers for the international airport in Honolulu.

The US Department of Labor investigated an allegation of unpaid overtime, and "(our) investigation determined that Akal Security failed to pay seven K-9 handlers for their at-home care of the specially trained work dogs," said Susana Rincon, district director for the Labor Department's Wage and Hour Division in San Francisco, in a statement. "In addition to the recovered back wages, the employer has paid a civil money penalty of $1,540 for repeat violation of the federal overtime requirements."

The Fair Labor Standards Act requires covered, nonexempt employees to be paid at least the federal minimum wage of $6.55 per hour for all hours worked, plus time-and-one-half their regular rates of pay for hours worked beyond 40 in a week.

More UNPAID OVERTIME News
The forgoing issue with the dog handlers illustrates in a tangible way how often work is expected to be done at home, outside of company time. For the most part, that work involves computers. While many employees today have the capacity and the permission to work at home for billable hours, there is always the temptation and indeed the expectation to take work home with you and slave away, doing company business on your home system. All too often, it is also on your own time.

In the case of the dog handlers, their charges need to be fed, exercised and cared for in other ways. That can be costly. Thus the argument is that if you take your work home with you—even if your work is a four-legged animal requiring companionship, care and attention—you should be paid overtime.

Just two examples of how an unpaid overtime lawyer helped the employees of two companies, collect their due.

If you have suffered losses in this case, please send your complaint to a lawyer who will review your possible [Unpaid Overtime Lawsuit] at no cost or obligation.
Request Legal Help Now