Donning and Doffing at Heart of Overtime Pay Lawsuit

It can be a complex, contentious issue: determining who receives overtime pay and who is exempt from such pay based on overtime laws. However, also at issue is what constitutes "work" as it applies to overtime rules. Should a person who is required to put on uniform prior to a shift be paid overtime for dressing? According to at least 1 court, which faced that question as it related to a lawsuit, the answer is yes. 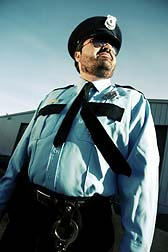 The lawsuit was filed in Los Angeles, California, however it may have wide-reaching implications for workers, especially police officers, across the country. The plaintiffs, police officers from the Los Angeles Police Department, filed suit alleging they should be paid overtime for the time it takes them to put on and take off their uniforms, holsters, bullet-proof vests and other necessary work equipment. According the plaintiffs, they must have their uniform on by the start of their shift or they face discipline from their supervisors.

US District Court Judge Gary Feess agreed with the officers' claim, finding that because their uniforms are a part of the job—a vital part of the job, he said—the dress time falls under the US Fair Labor Standards Act and police officers should therefore be paid for the time it takes them to put on their uniforms. Generally, donning and doffing takes between 5 and 15 minutes before and after a police officer's shift, which could add up a lot over the course of a career.

The police officers' union has argued that compensation should be retroactive and should also be applied to overtime and pensions.

It is not only in California that the issue of dressing and undressing for a shift is a hot topic. In some areas, law enforcement agencies do pay officers for time spent putting on and taking off uniforms but that is not a universal policy.

According to the Los Angeles Times, the US Supreme Court has considered the issue of donning and doffing multiple times and has generally sided with workers.

In 2006, George's Processing Inc., agreed to settle a lawsuit filed by employees who claimed they should have been compensated for time spent putting on and taking off work clothes. The suit was settled for approximately $1.2 million. In 2005, the US Supreme Court unanimously ruled against a mining company, finding that the company should have paid its employees for time spent donning and doffing work gear.

In February, 2009, a lawsuit was filed against Pilgrim's Pride Corp., alleging employees should have been compensated for donning and doffing their work gear, which reportedly includes, "a smock, cotton gloves, steel gloves, rubber gloves, plastic apron and sleeves, rubber boots, hairnet and ear plugs." According to the Wall Street Journal, the suit was filed on behalf of 11,000 employees seeking $45 million in unpaid overtime and damages.

In court papers, plaintiff Dorothy Webb states, "I was told by my supervisors that if I did not come early to perform these tasks before my shift started, I would be marked late. I was also told these tasks were mandatory and had to be completed before the production line started, and if I were to not be at my workstation when the production line started I would be deducted for being late to the line."

More OVERTIME News
Furthermore, according to the court papers, employees were required to take their gear off and clean it for their 30 minute lunch break and then put it on again to return to work. "I estimate that the time I spent during the lunch break putting on, taking off and cleaning my protective gear and equipment was approximately fifteen (15) minutes. Thus, I am usually working a total of fifteen (15) minutes during my unpaid lunch break," Webb's court documents state.

Of course, the major issue with donning and doffing lawsuits is whether or not putting on mandatory work gear is considered time spent working. Many lawsuits have been filed alleging that time spent in mandatory work-related duties, including dressing in required gear, should be compensated. For many employees this actually occurs before or after an 8 hour shift, making time spent dressing and undressing unpaid overtime.