In yet another example of a drug earning approval in the face of dissenters, the Ortho Evra birth control patch was approved by the US Food and Drug Administration (FDA) in 2001 despite strong opposition from one of the agency's own medical reviewers. 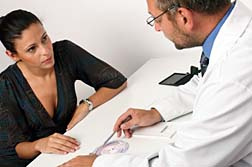 Since then the Ortho Evra birth control patch, widely known as 'The Patch' by users, has been the subject of numerous lawsuits after woman—many of them young—have developed blood clots and died as the result of using the product.

Ortha Evra is manufactured by Ortho-McNeil Pharmaceuticals, and is the only product of its kind that provides birth control by way of a norelgestromin and ethinyl estradiol transdermal skin patch. This hormonal method of birth control delivers a steady stream of hormones into the bloodstream by way of the skin over a period of seven days.

All seemed well, at least in the general public's mind, until July 2005 when an investigation undertaken by the Associated Press exposed the risk for blood clots, and the exposure to increased amounts of estrogen when compared with the typical birth control pill.

Even more disturbing, was the presence of an FDA dissenter before the Ortho Evra patch was even approved in 2001. Prior to the ultimate approval of 'The Patch' in November of that year, an FDA medical reviewer took exception with the manufacturer's conclusions regarding two cases of blood clots in the lung affecting two, rather young participants in the Ortho Evra clinical trials.

Using large caps to emphasize the concern, the reviewer "DOES NOT AGREE WITH THE SPONSOR'S [Ortho-McNeil] ABOVE CONCLUSIONS. The two cases of pulmonary embolus, a serious and potentially fatal condition, must be counted as two cases in the … group."

In spite of those reservations and the reviewer's ominous warning, the FDA gave Ortho Evra the nod. Cut to July of 2005, when the Associated Press (AP) was reporting that 17 of the 23 deaths associated with the use of the Ortho Evra birth control patch appeared to be related to the formation of blood clots. AP went on to report that 12 deaths had been reported to the FDA during the preceding year.

And so it was in November of 2005, four months after the Associated Press blew the whistle on Ortho Evra, that the FDA fostered a label change to the product, indicating the increased risk of blood clots, and representing double the risk of clots for women taking The Pill. Exposure to estrogen was found to be 60 percent higher with The Patch, then with The Pill.

Within two months Ortho-McNeil Pharmaceutical Inc and its parent company, Johnson&Johnson were beginning to settle lawsuits stemming from injury, and death related to the use of the contraceptive patch. Blood clots, strokes, and heart attacks were just some of the adverse reactions reported. Many patients died—and many of those patients were young.

Subsequent to the label change, Ortho-McNeil found itself admitting that preliminary results of a safety study conducted by the manufacturer suggested an increased risk for blood clots, although early data from a second Ortho safety study demonstrated no increased risk. That was in February of 2006, and that question mark didn't stand for long. By September of that year Ortho was back to update the warning label again, and later in the Fall of 2006 concern emerged with regard to obese women and their higher risk factors for developing blood clots.

More ORTHO EVRA News
Little wonder that the Ortho Evra lawsuits are still coming. It was reported in May that a new Ortho Evra class action lawsuit had drawn 30,000 participants—and there could be other actions in the works. Various consumer and advocacy groups, including Public Citizen, are lobbying the FDA to ban the Ortho Evra contraceptive patch from the market completely.

Beyond that, are the questions:

Why did the manufacturer wait until a press expose uncovered the dangers, almost four years after the drug was approved? Within that four-year window, five million women were using The Patch without knowing the risks, and many women had died from developing blood clots. How many of those women may have eschewed the Ortho Evra patch, and might have chosen a different form of birth control, had they been aware of the risks?

And why did the FDA approve the product in the first place, over the strong objections of one of its own medical reviewers?

Time will tell. And the story will be told in the courts of law. Hopefully, no more women will die of blood clots, before those answers are found.

If you have suffered blood clots as a result of using the Ortho Evra birth control patch, please send your complaint to lawyer who will review your possible [Ortho Evra Lawsuit] at no cost or obligation.
Request Legal Help Now