The first known fatality blamed on the Ortho Evra Patch was reported more than three years ago, when an 18-year-old Manhattan student collapsed in a subway station and subsequently died from a blood clot in her lung. Since that time, there have been at least 50 deaths. The FDA has it on record that since August 2002, many women have suffered deep venous thrombosis (DVT), pulmonary embolism (PE), blood clots, heart attack and stroke. Incredibly, this birth control device is still on the market.

Back in 1988, the FDA requested the withdrawal of oral contraceptives with estrogen levels higher than 50 micrograms because of the risk of blood clots. Yet the patch contains estrogen equivalent on average to a 56-microgram pill. Wake up, FDA! 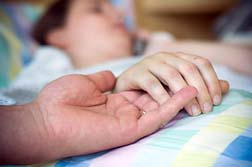 Public Citizen says that, compared with standard oral contraceptives that contain less estrogen, Ortho-Evra (norelgestromin and ethinyl estradiol) increased users' risks of blood clots as well as painful side effects such as breast discomfort, severe menstrual pain, nausea and vomiting; and the likelihood of discontinued contraceptive use.

As for the manufacturer's response to Public Citizen's request, a spokesperson for Johnson and Johnson said that "All hormonal birth control methods have benefits and risks, and the approved Ortho-Evra product label has always stated the known risks associated with its use." Not reassuring.

Lawsuits
A case in a federal trial court in Ohio involving the Ortho Evra birth control patch alleged that the patch claimed to have "caused disaster by releasing far more estrogen into the body than birth control pills do, while its FDA approved label wrongly described the amount of estrogen it released."

The Times article also pointed out these startling facts:

- Johnson & Johnson's own internal documents showed that it knew the patch exposed users to far more estrogen each day than low dose pills.

More ORTHO EVRA PATCH News
- Plaintiffs' lawyers and professors say that drug companies, on which the FDA necessarily relies to fully and honestly report test results, know and take advantage of the fact that the FDA is "overwhelmed," "does not have the funding or the manpower to police" them, and rarely penalizes them even when they violate agency rules.

It wasn't until late 2005 that the FDA required a warning that the patch contains higher levels of estrogen than most birth control pills. Lawyers for Johnson & Johnson used the FDA's warning as leverage: it responded to the warning by saying that patients should not be allowed to sue the company because the agency approved the patch and its label.

Now, Johnson and Johnson's lawyers are busy: a New York Times article reported that more than 3,000 women and their families have filed lawsuits against the company, claiming "heart attacks, strokes and, in 40 cases, death."