Ortho Evra Patch Would Be Banned, If It Were a Pill

If the Ortho Evra birth control patch were designed as a pill, it would have been banned. That's because the US Food and Drug Administration (FDA) banned, in 1988, any and all birth control pills that contained more than 50 micrograms of estrogen over concern for the development of fatal blood clots. According to various reports the Ortho Evra patch exposes the patient to the equivalent of estrogen found in a 56-microgram pill, or more. 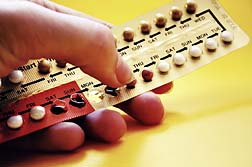 Perhaps it was felt that since estrogen would be absorbed through the skin, rather than taken orally, there needed to be more estrogen in Ortho Evra birth control to be effective. Who knows? Obviously, pre-market testing did not successfully forecast what has been found to be the case once the Ortho Evra patch was approved and hit the market, achieving 9.9 million prescriptions at its peak in 2004.

However, a litany of adverse reaction reports, including the formation of blood clots and the resulting deaths of heartbreakingly young women, suggests that the theory did not match the reality.

"Had Ortho-Evra been designed as a pill, it is unlikely to have been approved because of its increased estrogen content," says Dr. Sydney Wolfe of the consumer advocacy group Public Citizen. The latter has long campaigned to get the Ortho Evra patch off the market and banned completely, given studies which appear to show that women using Ortho Evra birth control have twice the risk of blood clots as women taking an oral contraceptive.

It has been shown that Ortho Evra patients also have increased risk for additional adverse effects including discomfort of the breast, nausea, vomiting and severe menstrual pain.

The Ortho Evra birth control patch was initially seen as a boon for sexually active women who might be inclined to forget taking the required, daily birth control pill, and ultimately risking the onset of an unwanted pregnancy. With Ortho Evra, the requirement is simply to apply the patch once-per-week and wear it for a three-week cycle. It comes off for the fourth week, coinciding with the menstrual cycle, then is reapplied for the next three.

Convenient, and foolproof. However, it has also also proven deadly for some women. Deaths have been reported amongst women as young as their late teens, and young children have been suddenly, and tragically left without a mother after women, otherwise healthy, developed fatal blood clots.

For its part the FDA has updated the product labeling three times since 2005, and sales have plummeted since news of the concern, and resulting deaths have been reported in the media. From a peak of nearly 10 million prescriptions in 2004, sales had dropped to 2.7 million by the end of 2007.

More ORTHO EVRA PATCH News
When Johnson & Johnson introduced the Ortho Evra patch in 2001, it claimed that the new product would be preferable to a pill because it would provide lower and more stable estrogen levels, and would prove easier for women to take. But studies have suggested otherwise, and cast doubt on the validity of the first two claims. Public Citizen says that improved compliance is not enough of a benefit to outweigh the serious risks that have emerged, and wants it banished.

According to a review conducted by the advocacy group, the Ortho Evra birth control patch exposes women to up to 60 percent more estrogen than the pill, and a variation in hormone levels anywhere from 1.2 to 3.5 times higher.

However in spite of the warnings, label changes, and the injuries or deaths which have allegedly ensued, Ortho Evra birth control will continue to be available so long as the manufacture can prove, and the FDA is satisfied that the benefits of the Ortho Evra birth control patch outweigh the risks. Only when that quotient is reversed, is when the campaign to banish the Ortho Evra patch from the market acquires real legs.

Posted by
Kim C.
on March 28, 2016
I have a horrible time remembering the pill and there's not many that don't make me breakthrough bleed the whole month. I was going to try the patch and called my doctor to call it in. I thought it was a done deal but my doctor later called me, saying she would not prescribe it to me. She said she had quit promoting it years ago when her own patients, who didn't have any risk factors, were turning up with blood clots. I was the first to apparently ask in awhile so she researched if it had become any safer and had found more studies about the dangers. When she contacted the pharmacy to make double sure, they told her most doctors quit prescribing it all together because of the health risks and from what they have seen of it over the past decade, it's still causing the same problems.

Thanks to my doctor for looking out for me and not being "prescription happy". :)