Ortho Evra: the Known and the Unknown

Yet another young woman has died, allegedly from using a birth control device similar in hormone delivery as the Ortho Evra patch. More than 4 million women are using Ortho Evra as a means of birth control--which means a great potential for more deaths.

It is not known exactly how many Ortho Evra deaths have occurred since the contraceptive was approved because the FDA's reporting system is voluntary but what is known is that during clinical trials, the apparent death rate was 3 in 200,000. 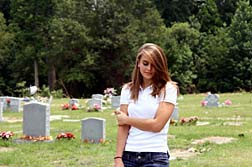 Back in July 2005, the FDA's MedWatch program reported 23 deaths related to the Ortho Evra birth control patch and 17 of those cases "appeared to be related to the formation of harmful blood clots". The Associated Press reported that in 2004 alone, 12 deaths of Ortho Evra users were reported to the FDA.

Another alarming statistic is that nonsmoking women under 35 who use the pill have a 1 to 3 in 10,000 chance of having a nonfatal blood clot and a 1 in 200,000 risk of dying from a blood clot. According to the Associated Press, should the same women use Ortho Evra, the rate of nonfatal blood clots was about 12 out of 10,000 during clinical trials.

In April 2004, an 18-year-old New York fashion student died while using the Ortho Evra patch. According to officials for the FDA and Ortho McNeil, the death is the first linked to the contraceptive patch. Information from the Medical Examiner's Office indicates Zakiya Kennedy's death was caused by a blood clot.

A 25-year old mother of three died in November 2004: it was determined her death was caused by the release of hormones brought on by the Ortho Evra patch she had started using a few weeks prior.

And on August 13, 2008 Katie Payne, a 22-year-old mother from California died. An investigation is underway but the coroner asked her fiancée if she was using birth control. "When a young, active woman dies of a blood clot, birth control is one of the factors that has to be considered," said Dr. Elizabeth Albers, the pathologist who performed her autopsy for the Sacramento County Coroner's Office.

Payne was using a similar product, sold by Schering-Plough, which pumps about the same amount of hormones into the system as the Ortho Evra patch. The Web site and product information warn that one of its hormones, desogestrel, may cause more clotting than the progestin in some birth control bills. But it adds that the difference in risk between the ring and some birth control pills is unknown.

The patch is also difficult to determine if the hormone dosage delivered is the same as in oral contraceptives. It is mind-boggling that these products are on the market, given the "unknowns".

More ORTHO EVRA News
What is known is that the risk of death from a blood clot is three times higher for women using the patch. And from a September 2006 study, women using Ortho Evra were twice as likely to develop blood clots as those using oral contraceptive pills. So why are the FDA and Ortho McNeil and even some doctors maintaining that reports of Ortho Evra deaths are no cause for alarm?

Wendy Wright, senior policy director of Concerned Women for America, says doctors' advice to keep using the patch to avoid pregnancy despite death and serious side effects is an "unbelievable admission...that reveals a disturbing view within the medical community – that it is worse to be pregnant than dead."

If you or a loved one has suffered a blood clot, heart attack, stroke or other serious injuries while or after using Ortho Evra, you may want to seek legal help.