Is Alli the Next Fen-Phen?

Little more than a decade ago, thousands and thousands of consumers suffered severe side effects from Fen-phen, and even now, many people continue to be diagnosed with primary pulmonary hypertension, a life-threatening illness. Have Alli users forgotten the dangers of weight-loss drugs such as over-the-counter Alli or the prescription product, Xenical? 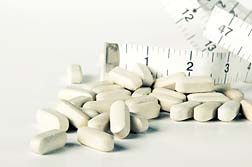 The FDA has now linked Alli (orlistat) with liver disease, which is also life-threatening. As for Alli-maker GlaxoSmithKline (GSK), it says that while the company is as concerned as the FDA is about liver injury, orlistat is a much-studied drug with a long track record and it is "safe and effective when used as directed." That's what American Home Products (AHP) said about its Fen-phen cocktail.

It's no wonder GSK is denying their product causes liver damage: Last year's sales of Alli were $123 million. (Losing weight the Alli way costs $45 every 20 days.) But is GSK's pockets deep enough to pay for damages to countless consumers who use this wildly popular weight loss drug? In 1999, AHP agreed to pay $3.75 billion to the users of Fen-Phen after a damaging report showed that users who took the drug for more than two years were at risk of developing heart valve disease by 17 percent.

And just recently Pfizer agreed to pay $2.3 billion in a settlement over misleading marketing for Bextra, Geodon, Zyvox, and Lyrica.

More ALLI News
Back to GSK: it says Alli is barely taken up by the blood as it operates exclusively in the gastro-intestinal tract; therefore there would be no evident biological process that would associate Alli to liver damage.

Tell that to at least 33 patients who took Allie and Xenical (the drug's prescription version): Twenty-seven people were hospitalized and six suffered liver failure. Even with these reports, the FDA advises patients to keep using the drug until further notice, with a warning to "consult their health care professional if they are experiencing symptoms." Some of those symptoms of liver damage include fatigue, fever, nausea and vomiting.

Wouldn't it be safer (and cheaper) to just go the old-fashioned route and eat less, exercise more? Besides, you still have to maintain a healthy diet and exercise while taking Alli. So why bother taking it?

If you have suffered losses in this case, please send your complaint to a lawyer who will review your possible [Alli Orlistat Liver Damage Lawsuit] at no cost or obligation.
Request Legal Help Now