It was a horrendous oil rig accident that left 23-year-old Dennis Gurney enduring 40 painful surgeries over a 15-year period that still left him scarred for life. And even though he received a settlement from his employer that guaranteed he would never have to work again, life was not easy for Gurney. 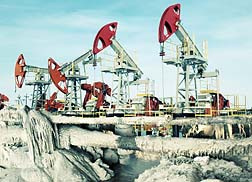 The lives of those injured and maimed from oil rig accidents are hard and unpredictable, in spite of whatever compensation is won from an employer. Some may argue that no amount of money could compensate for the horrific injuries suffered by the young oil rig worker on February 27th, 1980.

This past Sunday the Denver Post recounted the harrowing events that followed the accident that occurred on an oil rig platform near Freer, Texas. Gurney was disconnecting a pipe loaded with diesel-laced mud.

His body was covered in the mud spray from the pipe. Not an unusual occurrence and not of any concern, provided there was nothing present to ignite the fuel.

But there was. A heater on the platform intended to keep the workers warm on a cold night ignited the diesel in the mud. Gurney found himself instantly in flames, and instinctively began to run down the platform stairs. But then, still on fire, he ran back up to secure the spewing pipe so his fellow workers wouldn't be burned.

More OIL AND GAS ACCIDENTS News
A brave act, but one that nearly cost him his life and bought for him years of intense pain and suffering. The accounts of his first few nights are horrifying. His ears, and nose were burned off. He died several times in the emergency room, only to be revived. Doctors had to use pig and cadaver skin, as he lacked sufficient skin on the rest of his body for grafting. Those grafts failed.

Meanwhile he had a pregnant wife, and a toddler waiting for him at home. Doctors would not let Pamela Gurney see her young husband for six weeks, fearing the sight of him would prompt a miscarriage.

But they endured, and his settlement helped pay for a half-million dollar home near a golf course. But the money could not soothe his emotional scars. Depression set in. He drank heavily. On the night of July 25th 2009 at the age of 52 he took his own life and that of a police officer, wounding two others.

Oil rig accidents can, and have proved horrendous and tragic. Those lucky enough to survive may, in the end, realize they are not lucky at all