In May of last year, bank employee and whistleblower Richard Boywitt approached his boss about a potential money-laundering scheme involving a bank client and two tellers. As the Bank Secrecy Act Compliance Officer for Brunswick Bank and Trust, it was his job to report any suspicious activity. 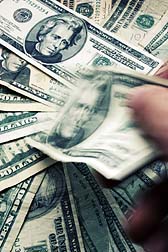 According to court documents, Boywitt became aware of questionable activities at the bank while conducting his audits. On more than one occasion, he was told by senior bank staff to stop an audit when he asked too many questions.

Boywitt's Waterloo was his discovery that a bank customer had repeatedly exchanged thousands of dollars in "old" cash for new currency. A few of the bank tellers were not cooperating with the auditor's request to record serial numbers and segregate the money, and had not advised Boywitt when the customer came in a second time.

The Bank Secrecy Act, as enacted by Congress, requires that banks file timely Suspicious Activity Reports (SAR) when they receive transactions which have "no business or apparent lawful purpose or [are] not the sort in which the particular Customer would normally be expected to engage, and the bank knows of no reasonable explanation for the transaction after examining the available facts, including the background and possible purpose of the transaction."

More NEW JERSEY LABOR LAW News
At the end of April in 2007, Boywitt informed his employer that he was about to issue a SAR. He was fired two days later.

New Jersey law prohibits termination under such circumstances. The New Jersey Conscientious Employee Protection Act, also known as the Whistleblower Act, features a number of protections for employees who report unlawful activity. If an employee has reason to believe that a violation of rule, regulation, or law has occurred in the workplace, he cannot be discriminated against for speaking out or reporting the violation. That includes testifying during an investigation.

What's more, an employee cannot be fired or discriminated against for refusing to participate in or objecting to an activity he considers suspicious, unlawful, or dangerous to the environment.

Speaking out is the right thing to do—and in New Jersey, the law is on your side.

Click to learn more about LawyersandSettlements.com
LawyersandSettlements.com is an online news and information site for the general public and legal community. As a legal news resource, we have emerged as an independent & trusted voice. We provide detailed and quality information on various lawsuits filed including Discrimination Cases, Employment Law Cases, and Whistleblower Cases.