Just before Christmas, 2007, the plaintiff, Babette Perry, was working as a pharmacy technician at the Hampton Behavioral Health Center when a masked gunman allegedly entered. He demanded OxyContin and, according to the lawsuit, claimed that he was holding one of the plaintiff's coworkers hostage. The plaintiff says she attempted to call for assistance but discovered that her phone was not working. 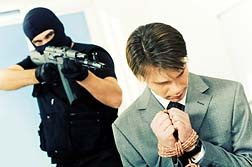 According to the lawsuit, the entire event was a staged situation—a safety drill designed by Hampton Behavioral Health Center and its parent company, Universal Health Services of King of Prussia. The plaintiff says she was never trained in how to deal with such a situation and had no idea she would be subjected to the safety drill.

Furthermore, she says that since the ordeal, she has been treated for depression, panic disorder and anxiety and suffers from post-traumatic stress disorder and insomnia. The lawsuit says that the defendant, "believed that the gunman was capable of shooting her or holding her hostage." The lawsuit also alleges that the gunman worked for Hampton Behavioral Health Center and that Perry's phone was purposely tampered with to prevent her from making a call seeking assistance.

So far, no comment has been made by either of the defendants.

Meanwhile, at least three lawsuits have been filed against the Hunterdon County Prosecutor's office, accusing prosecutor J. Patrick Barnes of various offences. One lawsuit, filed by Lt. Jeffrey Farneski, says the plaintiff was targeted because of his refusal to participate in activities that he felt were illegal and unethical, according to an article at newjersey.com (nj.com, September 18, 2009). Those activities allegedly include changing an accident report after officials did not perform drug tests when a detective crashed a county vehicle.

A friend of Barnes called the allegations "frivolous."