It seems like the sort of thing you would only see in a movie: a nail gun accidentally goes off and a person is seriously injured. Yet this sort of thing is happening all too frequently in real life. In fact, at least one nail gun has been recalled because the gun has operated while the safety lock was in position. Meanwhile, lawsuits are being filed against nail gun makers as more people are seriously injured by nail gun accidents. 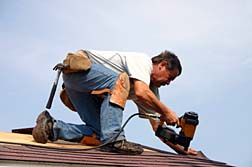 Nail guns are a popular tool in the construction industry. They are quick, air powered and allow for automatic firing of multiple nails. Nail guns are popular despite warnings from researchers that they are highly dangerous. According to an article in the Sacramento Bee, nail guns can fire 30 nails a minute and those nails can travel up to 490 feet per second. That makes nails fired from nail guns a very dangerous weapon.

Think about the shape and structure of a nail: long, narrow and a sharp, pointed end. At the rate a nail gun fires the nails, a person could be seriously injured if he somehow made contact with a fired nail. Unfortunately, that's exactly what happens. Countless construction workers have been injured after a nail gun was accidentally fired into their skin.

The problem is that in contact trip mode, the mode that makes nail guns "automatic," the gun automatically fires whenever it makes contact with a surface with just one squeeze of the nail gun trigger. So, if the gun is put in contact trip mode, the user need only pull the trigger once and after that, every time the gun comes into contact with a surface, it fires a nail—and the gun does not differentiate between a wood and skin surface.

Now, a widow whose husband died after he was accidentally shot by a nail gun has filed a lawsuit against Hitachi-Koki U.S.A., a toolmaker. The lawsuit alleges that the nail gun her husband was using was "negligently designed, defective and of 'dangerous character and condition'."

Of course, the nail gun industry is responding to such lawsuits by blaming the victim or other nail gun users, saying that injuries associated with air-powered nail guns are usually the fault of the person using them. However, safety experts argue that guns that include the contact trip setting are incredibly dangerous and could be replaced by guns that require the trigger to be pulled every time a nail is fired, rather than one pull of the trigger allowing multiple nail firings.


With an increase in the number of nail gun related injuries, and a likely increase in the number of lawsuits filed against nail gun manufacturers, it may be time for tool manufacturers to consider a safer alternative. At least one company has announced it will stop making nail guns equipped with automatic firing systems. Amigo Tools & Fasteners Inc. made the announcement after learning about the numerous deaths and serious injuries associated with automatic firing nail guns.

If one company can make the switch then the others should be able to as well.

If you or someone you love was harmed by an automatic firing nail gun, you may be eligible to file a lawsuit against the gun's manufacturer. Contact an experienced lawyer to discuss your legal options.

If you have suffered losses in this case, please send your complaint to a lawyer who will review your possible [Nail Gun Injury Lawsuit] at no cost or obligation.
Request Legal Help Now

Posted by
Michael Derosier
on January 12, 2015
The nailgun discharged two nails at the same time, one punctured my finger. The manufacturer is Hitachi.