When the Causeway investment fund closed itself off to most new investors on February 28, 2005 the management of the Fund stated they believed it was prudent to limit asset flows into the Fund before it reached asset capacity, in order to preserve the Fund's investment flexibility and integrity. Causeway International Value Fund re-opened to new investors almost three years later—February 1st 2008—in an effort to stabilize cash flow as a hedge against expected outflows. However, one wonders if Causeway mutual fund losses, currently in the double-digits, might have something to do with that strategy. 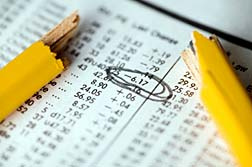 Pundits have remarked over the years that investing is about an exact a science as forecasting the weather. Tremendous knowledge and experience is brought to bear, against an unpredictable foe. Sometimes you get it right, and sometimes you don't.

In the current market the bear is starving and angry, and predictably will be on the rampage for a good long while. That's aside from the global credit crisis that has spun from a US economy that appears to have lost complete confidence in itself, with the rest of the world falling in line. There's that 'C' word—confidence—and when you lose that, you pretty much lose the key to the candy store.

There is little doubt that the current economic waters represent uncharted territory, and the stormy sea of economic discontent shows little sign of quieting. Holders of mutual funds and other stocks must take some solace in the fact that everyone is hurting today. That said, you have to wonder if the funds you have invested in, have been managed with the best interests of investors at heart.

The no-load, open-end Causeway International Value fund had been closed to new investors in 2005 at a time when the economy was steaming ahead, and there was little warning with regard to the coming implosion of the real estate sector and the sub-prime mortgage crisis that would trigger it.

Perhaps the emerging storm clouds beginning to gather on the horizon had something to do with the re-opening of Causeway International Value Fund to new investors on February 1st, 2008. Who knows? However, Fund management re-stated its strategy of three years prior when it closed the Fund to new investors, that it remained committed to limiting the asset growth of the Fund—and would, indeed close the Fund again as needed to preserve the investment flexibility and integrity of the strategy.

Such a strategy probably made sense in 2005 when times were better, and it was obvious that Causeway International Value Fund management held that such a strategy was prudent in both good times and bad. Obvious, because even though February 1st 2008 was well before the proverbial dung really hit the fan, the expectation of a downturn was on everyone's mind, and forecast a month or so prior.

Money managers had already seen a declining trend in earnings beginning to emerge at the start of 2007, so the signs were there even then. In a story that ran in Fortune Magazine dated January 2nd 2008, four superstar money managers were buttonholed for their views on the emerging New Year, and what was in the crystal ball. Sarah Ketterer, the CEO of Causeway Capital Management and described as the 'pilot' of the Causeway International Value Fund, was one of the four gurus consulted. "Although we don't expect a recession," she said in Fortune, "we do think it will feel like one in 2008."

A month later, Causeway International Value Fund was re-opened to new investors, and since then the Fund has been in tough. As of August 21st the Fund, it was reported, was valued at $1,990.439,694 with a total performance of negative 31.74 percent. Among the Fund's worst moves, according to a report dated today on the MFFAIS web site, was the potential loss of more than $20 million dollars on changes made with Deutsche Post AG (DEUPF.PK) when Causeway bought shares, only to see the value fall. Offsetting that loss somewhat was a sale of shares in Bp Plc (BP) before prices went down, resulting in a $7,626,631 'save.' However, that stickhandling would not have offset the potential loss resulting from the purchase of devalued shares in Deutsche Post Ag.

As of September 30th 2008, it was reported that Causeway International Value Fund had posted a Year-to-Date Return of negative 27.55 percent.

More MUTUAL FUND LOSSES News
There is little doubt that things are far worse today than anyone could have ever imagined. Who would have predicted the day when five bucks would have bought you a share of Ford AND a share of General Motors—with maybe some change left over? But that's the reality. Most were predicting there would be some tough slogging in 2008, but nothing like what has played out. Still, Causeway International Value Fund re-opened to new investors at the start of the year, ostensibly to offset expected outflows and to stabilize cash flow. However, as of February 1st of this year the stated strategy remained to limit asset growth and preserve the integrity of the Fund.

In hindsight, given how 2008 played out, does that strategy help? Or hurt? Is it prudent? Time will tell. In the meantime, Causeway International Value Fund investors might be wise to consult a Causeway mutual fund losses legal professional, to determine if losses could have been prevented.

If you have suffered losses in this case, please send your complaint to a lawyer who will review your possible [Mutual Fund Losses Lawsuit] at no cost or obligation.
Request Legal Help Now