Motorcycle Accident Death: The Nails in the Coffin Were Painted

There's something about the increased openness of the open road that entices the motorcycle rider: it's just you and a minimalistic expanse of metal and rubber just below you. Yes, you are more vulnerable—so you take precautions and ride responsibly. Even so, when a motorcycle accident involves motorcycle injury most people assume it is the rider who causes most motorcycle accidents. 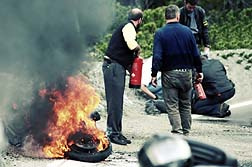 Take the tragic case of Anita Zaffke of Lake Zurich, Illinois. The woman had stopped her motorcycle at a yellow caution light in the Chicago suburb earlier this month when she was struck from behind by a car. It was not known if the woman was commuting, or just out for a leisurely ride in the newly minted springtime air.

No matter. According to a report in the Chicago Tribune from United Press International (UPI), the motorcyclist was simply in the wrong place at the wrong time. Lake County Sherriff's Sgt. Scott Morrison reported that "she could not have done anything to avoid it."

What the doomed motorcyclist could not avoid was the car that violently plowed into her after failing to slow and thus stop at the lighted intersection. According to the account in the Chicago Tribune an unidentified woman was driving a Chevrolet Impala and allegedly didn't see the motorcyclist already stopped ahead of her, having obeyed the light at the intersection.

The driver of the car didn't see the motorcyclist because she was allegedly painting her nails at the time.

Zaffke was thrown from her bike due to the collision and later died of chest and abdominal injuries at Advocate Good Shepherd Hospital in Barrington, Illinois.

"It appears to be a tragic accident," Sgt. Morrison told UPI. "It appears [Zaffke] did nothing wrong," and could not have avoided the motorcycle accident.

Car drivers have long lamented the motorcycle, whipping past as they sometimes do, to many the personification of recklessness. And true, there are some riders who behave like demons and terrorize all others on the road.

However, the majority are responsible riders and respectful of laws and basic traffic decorum. They are aware of their increased vulnerability and take no chances to invite risk.

Drivers, on the other hand have been known to do their nails, read the newspaper, talk on their cell phones and even send or receive text messages while operating a motor vehicle. Not only are they a threat to themselves, but also they risk doing harm to others on the road, as this story has shown.

In contrast, a motorcyclist can do no such concurrent activity while piloting a bike—save for listening to a radio, or perhaps speaking to a passenger through a closed-circuit communications system.

Indeed, the motorcycle rider—be he reckless, or responsible—has little choice but to keep two hands on the handlebars, his feet on the pegs and his eyes on the road.

More MOTORCYCLE ACCIDENT News
Pity the responsible rider if the car following behind contains an occupant who, safe in the cocoon of her sound-deadened car, is spending more time fiddling with the GPS system, or reaching down to tie her shoes, or reading her Blackberry, painting her nails or putting on make-up…even reading the newspaper…when she should be focusing on controlling the multi-ton expanse of metal and machinery that surrounds her.

Machinery that is, ostensibly, operated with limited control and bearing down on a vehicle less than a quarter of its size and weight.

Most drivers see motorcycles as a scourge. But many lawsuits are brought by riders who suffer motorcycle injury—or worse—in a motorcycle accident caused by an inattentive driver. For the rider, motorcycle accidents are a far greater risk of harm for the rider, than for the driver. The driver in this story, by the way, was issued a ticket for failure to reduce speed and avoid an accident. She may face additional charges.