Motorcycle accidents are the worst types of accident, given the exposure of the rider and the number of things that would prove survivable if they occurred in a car, but not in a motorcycle crash. Adding to the risk of motorcycle injury, are two other factors—the youth of some riders, and the advanced age of others. 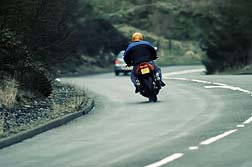 Kevin R. Gay, 45, of Westville Illinois, was 24 days into the New Year when his year, and his life came to a tragic end. The middle-aged man was riding his motorcycle along a highway just after 1pm on January 24th when he initiated a lane change. There is every indication that Gay was riding safely and responsibly. However an equipment malfunction appears to have thrown him to the clutches of death.

Specifically, according to witnesses, a piece of the motorcycle descended to the pavement and began sparking. There is suspicion that it may have been a kickstand, which would explain what happened next. The man lost control and hit the curb, the impact forcing Gay over the handlebars and directly into the path of a utility pole. Bystanders were reported to have attempted CPR immediately upon the stricken rider, but to no avail. He was pronounced dead a half-hour later in hospital, the victim of a fatal motorcycle accident.

A piece of equipment falling from a car would not have as dramatic an effect, one would assume, as a similar incident happening to a motorcycle. A car's center of gravity, and stability is much more assured given there are 4 wheels vs. 2, and that movement does not preclude balance. The possibility of a kickstand, bolted rigidly to the motorcycle frame, suddenly dropping down and striking the pavement in mid-flight would prove a challenge for even the most experienced motorcycle rider.

And therein lay the problem. Excessive speed, and inexperience exhibited by young people and newcomers to the motorcycle world—and older Americans who are returning to motorcycle riding after a time away.

The latter is a concern in places like the State of Florida, where there are more motorcycles on the road than ever before. In 2008 there were nearly 925,000 licensed motorcycles buzzing around the state.

Why? One reason is that recent retirees, in an effort to re-capture their youth, are either returning to a mode of transportation used many decades prior in their past, or are attempting the motorcycle lifestyle for the first time.

It's also cheap transportation in this era of high gas prices. With the kids having flown, who needs a passenger seat?

Clifford Brown, owner of the Pensacola Motorcycle Rider Training Center, said the riders most commonly involved in accidents are middle-age men who are getting back on a motorcycle after years of not riding.

"This is a perishable skill. If you don't reinforce it, it's gone," Brown said in a newspaper report, adding that people returning to riding will often buy a motorcycle that is very different from the one they learned on, and they can run into trouble without training.

"They go out and buy what their friends have, which is a big, heavy and more powerful motorcycle. If they survive the first week or two then they realize that, 'Hey, I should get trained.' "

While statewide motorcycle statistics are not yet available for 2008, Florida Highway Patrol reports a decrease in motorcycle fatalities. However, Sacred Heart Hospital in Pensacola treated twice as many motorcycle accident victims last year, than the facility did in 2007. And statewide, motorcycle crashes and injuries increased every year from 2000 to 2007. In the latter year there were 9,000 motorcycle accidents reported, with 8,000 corresponding injuries.

More MOTORCYCLE ACCIDENT News
Safety advocates are urging vehicle drivers to accept the presence of motorcycles on the road, watch for them and allow for them. Gary VerCrouse, of the Gulf Coast Chapter of the motorcycle rights advocacy group ABATE, suggested to the Pensacola News Journal that an unaware, or an intolerant vehicle driver is the motorcycle rider's worst enemy.

"These people that are running over us are saying, 'Oops, I didn't see them.'"