A tragic motorcycle accident has left one woman dead and an off-duty state trooper injured in Connecticut after a jarring collision with a passing car. 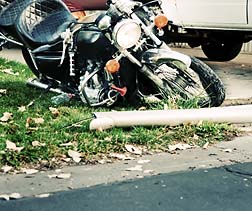 The accident, which occurred around 5:00 p.m. on November 8, happened when the officer's motorcycle struck the driver's side door of a car throwing the man and his female passenger from the bike according to the New Haven Register.

More MOTORCYCLE ACCIDENT News
Though neither the driver nor the passenger of the car was injured, the driver required extradition from the vehicle due to damages sustained in the crash.

Both the motorcycle passenger and driver were taken to a nearby hospital, where the woman was reportedly pronounced dead of serious injuries. The off-duty officer driving the motorcycle is currently listed as in stable condition according to the Hartford Courant.

Neither victim was wearing a helmet, which is legal under Connecticut laws.

Motorcycle accidents typically result in serious injuries with more than 100,000 motorcyclists being killed in accidents since 1966, a fact attributed to the lack of protection afforded by motorcycles, the speed at which the average vehicle is driven, and the difficulty of taller cars and trucks to see them.

If you or a loved one have suffered losses in this case, please click the link below and your complaint will be sent to an accidents lawyer who may evaluate your Motorcycle Accident claim at no cost or obligation.
Request Legal Help Now

Click to learn more about LawyersandSettlements.com
LawyersandSettlements.com - A trusted, independent legal news provider bringing quality news and information on legal cases and lawsuits filed in the United States of America to its readers since 2002. Over 650,000 legal help requests including Accidents, and Automotive accidents have been forwarded to lawyers all across to the country.