Three new Morgan Keegan investment lawsuits were filed this week over allegations that the firm mis-represented the real status of its Morgan Keegan fund, in so doing hiding serious exposures and losses that ultimately cost investors millions.

The losses have been substantial. As of the end of 2007 the Morgan Keegan RMK High Income Fund had lost 65.53 percent of its value. The RMK Multi-Sector High Income Fund was down 65.09 percent. Ditto for the RMK Advantage Income, and Strategic Income Funds, which posted devaluations at years' end of 65.68 percent, and 66.92 percent respectively. 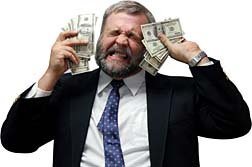 The allegation is that Morgan Keegan marketed the funds to investors as a safe, conservative alternative to money market funds. However, they were anything but, as the credit crisis deepened.

Analysts suggest that the complexity of the average prospectus doesn't help—overrun as they are with detail, facts and figures that few would take the time to read and digest. Thus, the mission to duly inform investors of both ends of the benefit/risk equation falls to the marketing materials. In a competitive market with hundreds, if not thousands, of funds competing for the attentions of the average investor, it's not surprising to see marketing materials highlighting the benefits and underplaying, if not completely ignoring, the risks.

It's one thing to talk about a fund dropping, which was the case with the Morgan Keegan Investment group of funds. Even a substantial drop makes compelling headlines. However, this is more than just about money. This is about retirement nest eggs, and people's lives, and livelihoods. This is about years of hard work and sweat equity swallowed up by some mysterious black hole.

This is about people—and the people profiled in Forbes magazine make for compelling reading.

Take James Lyle, a former firefighter who battled forest fires for a living before a disability forced him into retirement in 1994. Now 56, Lyle was looking for a safe place to park some of his cash and chose the Morgan Keegan Select Intermediate fund, in which he plunked down $65,000 in 2006.

But that was before the fund took a nosedive due to heavy exposure to collateralized mortgage obligations. The result? The fund share price dropped from $9.60 a year ago to just 97 cents. Lyle's loss from that fund, together with two other fixed-income investments, totals $150,000 or about a third of his net worth.

There are others. Martha and Aubrey Wright of Marietta, GA. lost over $100,000 in Morgan Keegan funds. That represents a hearty chunk of their initial investment—68 percent. To make ends meet the couple told Forbes that they've had to go back to work and cut back on their prescription medications.

More MORGAN KEEGAN News
And then there's Vince McCormack and his wife Marie. It was reported in Forbes that they lost $558,000 or about 90 percent of their investment in Morgan Keegan funds. McCormack is 71 years of age. How is he going to recover those funds at such an age?

Lyle was quoted in Forbes as saying that he blames Morgan Keegan, not his broker. "Especially when I bought in, my broker was telling me exactly what is in print.

Some law firms believe that individuals who file personal claims have a better chance for recovering damages, than participating in a class action. Either way, as the fallout from the credit crisis litters the financial horizon with broken promises and dashed dreams, jilted investors are fighting back the only way they know how, and through the only avenue open to them.

And that's through the courts of law.
READ ABOUT MORGAN KEEGAN LAWSUITS