The AARP Temple Leaving Many Seniors Out in the Cold

When sales of some AARP supplemental health insurance policies were suspended pending an investigation, the furor has turned a perhaps unwelcome spotlight on the American Association of Retired Persons. And the closer they look, a lot of people are not happy with what they see. 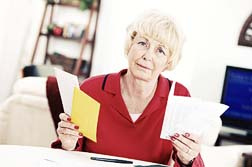 AARP has done well for itself as both a lobby group, and an association looking out for retirees since that day in 1958 when AARP founder Ethel Percy Andrus stumbled upon a retired teacher living in a chicken coop, as the poor woman couldn't find an apartment she could afford.

Since then AARP has grown to become one of the most powerful, and most trusted associations in the nation, if not the world. A Harris poll found in 2007 that AARP ranked only behind Consumer Reports and the American Red Cross as the most trusted group that influences US politics and business.

For holders of AARP-endorsed insurance policies, the expectation has always been that such clout and buying power should ideally translate to lower rates for insurance for AARP members, and to policies that are tailored to the specific needs of seniors.

But that doesn't appear to be the case. Many seniors have been duped, buying supplemental health insurance that they believed to be comprehensive, and would take care of any, and every eventuality. However, it has been reported that many of the policies sold by AARP to its members and underwritten by UnitedHealth Group are limited plans. There have been cases where seniors have been shocked to receive invoices for medical care, surgical procedures and hospital care that were assumed to be covered. One couple was shocked to find themselves facing a quarter of a million dollars in medical bills they assumed their AARP policy would cover.

Is such an assumption based on misleading marketing? That's the question US Senator Charles Grassley, the Republican from Iowa, wants answered. He slammed AARP back in November over its allegedly misleading marketing for health insurance policies, and a few days later AARP announced it would be suspending sales of the policies in question until an internal investigation was completed.

In the interim, various investigations have revealed just what AARP is and has become.
And what it appears to have become, is a business that may not have the best interests of its members at heart.

For one thing, AARP-sanctioned insurance policies are not, in reality, the least expensive. Not that AARP claims they are. It appears the organization does not make that claim, and actually urges its members, in the fine print contained in print and Internet ads, to shop around.

But most members, it appears, do not. Why should they? AARP is a trusted organization, with enormous clout and huge buying power. If an insurance policy is endorsed by AARP, then it must be the best deal around, right?

Not necessarily. Since the issue over the marketing practices of the AARP-sanctioned UnitedHealth Group policies first came to light in November, countless stories have surfaced where members who have bothered to check and not be innocently sucked in by the AARP mantra, have found that in many cases AARP insurance is more expensive than similar products offered by competing suppliers. Sometimes, a lot more.

That's because AARP charges a fee, or a royalty for the use of its name. The insurance company, such as UnitedHealth Group, views such an endorsement as a sound marketing principal, given AARP's clout with seniors and the trust it has earned over the years.

For AARP, such fees and royalties comprise an important revenue stream, and critics claim the organization is becoming increasingly dependant on such fees to fund its various lobbying activities, including the printing of brochures and a slew of advertising.

What do these fees and royalties have to do with the cost of insurance? Plenty. Those fees are passed onto the consumer. Thus, an insurance provider seeking to increase sales and raise its profile by putting the AARP label on its product pays AARP a fee for the privilege and passes the cost of that fee onto the policyholder.

And the marketing of some of those policies has been allegedly misleading, which is why Senator Grassley has his back up. Seniors are buying supplemental health insurance policies that appear to suggest they would pay for everything, when in fact there is a limit, or a cap on the payout. And the commitment to contribute, say $5,000 for an XYZ procedure may not help a senior who has no concept of the true cost of that procedure. So the policy might pay $5,000. Fine, but what if the procedure actually costs $15,000? Suddenly the policyholder is on the hook for $10,000—a bill a senior may ill afford in this economy.

And therein lay the foundation for the frustration, and the dismay many AARP members are now feeling towards their trusted association that appears to be operating more as a business, than an association. Seniors have long trusted AARP to sell them products that were better, and cheaper than anything else out there.

More AARP INSURANCE News
But that may not be the case. Many AARP members have found that they've been paying higher rates for insurance than they should have been, and were allegedly misled into buying supplemental health insurance that was comprehensive, when in fact it was not. Sadly, that realization may have come too late for many seniors now facing hefty medical bills.

What to do, if that's you, or it's happened to someone you love? Call a lawyer. AARP rakes in over a billion dollars a year in revenue. Its opulent headquarters in Washington has been described as 'a temple,' accented with brass and marble. If AARP can afford an office like that—and you don't even get a tour—they can afford to help you with your medical bills, after buying an AARP supplemental health insurance policy that may have misled you.
READ ABOUT AARP INSURANCE LAWSUITS

Click to learn more about LawyersandSettlements.com
LawyersandSettlements.com - A trusted, independent legal news provider bringing quality news and information on legal cases and lawsuits filed in the United States of America to its readers since 2002. Over 650,000 legal help requests including Elder Care Cases, and Financial Cases have been forwarded to lawyers all across to the country.