Medtronic Leads: "Nothing but Problems"

Patients who have the recalled Sprint Fidelis Leads implanted face a great deal of worry and uncertainty. They do not know whether or not their Medtronic leads will fracture, causing their defibrillator to malfunction. They are told that they cannot have the leads removed because the surgery is too risky; however, they may be able to have the leads capped to prevent any incorrect signals from being sent to the defibrillator.

"You know that guy with the 32 shocks in 40 minutes?" Robert Prisamt asks. "Well, that's me. I had a defibrillator implanted in 2002 and I've had nothing but problems since. I had a new device implanted in 2005, with what were supposed to be new leads, and I'm still having trouble." 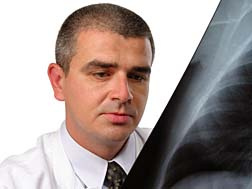 The leads initially used in Prisamt's defibrillator, because they were implanted in 2002, would have been the Medtronic Sprint Quattro, not the Sprint Fidelis Leads. However, Prisamt says that he suffered multiple shocks one year after the defibrillator was implanted—as many as 26 in a row. At the time, nothing was done about the shocks and the defibrillator and leads were left implanted.

In 2005, Prisamt had a new device implanted. He says he was told at the time that new leads would also be implanted. However, he later learned that some of the leads were the same ones that had caused his earlier shocks. "I had so many problems with the leads," Prisamt says. "They wouldn't function properly. On October 3, I had a heart rate of 207, but the defibrillator did not register a fast heart rate on that day. Six months ago I saw a cardiologist, a new one, who told me that my leads were barely functional. In fact, I was told in the ER that my leads were fractured and were dangerous."

More News
Prisamt wound up in the ER on November 5, 2007, with six unnecessary shocks from his defibrillator. Two days later, he underwent a cardiac catheterization. "The unnecessary shocks have caused damage to my heart," Prisamt says. "But I am unable to correct this situation because apparently, my leads are not on the recall list, so no one is willing to help me. I am still suffering heart problems, I cannot work and I cannot take part in any activity because I am afraid of my device malfunctioning. It is like I have a ticking time bomb in my chest. It hurts and causes damage when it goes off.

Prisamt's defibrillator has allegedly malfunctioned in two life-threatening ways: it delivered unnecessary shocks and it failed register a fast heart rate that may have required a shock to slow down. Yet he has been told that because his Medtronic leads are not on the list of recalled leads, there is very little that can be done.

"I want this situation corrected," Prisamt says. "I only have one heart. I have no choice. Something has to be done to take care of this problem."

Posted by
Billy Lee
on January 11, 2015
Of the 26 shocks I have received from my Medtronic pacemaker/defibrillator all were unwarranted. I was hit 19 times in a row once while doing light exercise. The device read a heart rate of 300 BPM when I was actually at 150 BPM. The doctors and the technician tried to hide it from me and no one seems to care. I live in fear of any physical activity including sex. There were people all around when the device malfunctioned and I had to go to the hospital. The damage done is unknown and I am now on medicine for PTSD. I really could use some help.