Medtronic Sprint Fidelis: Medtronic Tries to Get Off the Legal Hook

If you're a big medical hardware manufacturer and one of your products is found to be seriously—in fact, potentially fatally—defective, what's the right thing to do? That's the challenge that Medtronic Inc. faced when its Sprint Fidelis implantable defibrillator leads were found to be prone to fracturing and malfunctioning, either delivering shocks to patients' hearts at the wrong time or, equally as bad, not delivering shocks at all when they were needed.

By any measure, Medtronic's response has been weak, grudging, and blatantly more concerned with protecting itself and its profits than in making things right for the victims of its defective product. The vast majority of the 268,000 people carrying Sprint Fidelis leads in their chests have been told to do nothing. Medtronic says that the failure rate of Sprint Fidelis leads is allegedly low enough that undergoing the complex surgery to have them removed is riskier than leaving the Sprint Fidelis leads in. 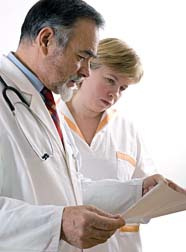 Mind you, if your implantable defibrillator does start jolting your heart with 800 volts at random intervals and can't be adjusted to stop doing that, Medtronic will generously cover as much as $800 of uninsured medical bills to have the Sprint Fidelis leads replaced. Of course, that won't make a big dent in the $12,000 surgical cost if you're one of America's 47 million uninsured—in fact, you could face personal bankruptcy to fix their mistake for them.

Small wonder, then, that Medtronic has been hit with a rash of individual and class action lawsuits, most recently from a Texas man who says that the combined trauma of malfunctioning Sprint Fidelis leads, debilitating surgery, and the continuing physical and psychological suffering has left him with post-traumatic stress disorder (PTSD). Time was you had to be in a war zone to get that.

Now Medtronic is going before the US Supreme Court in hopes of making all these suits go away. In Riegel v. Medtronic, a case involving a failed balloon catheter, they are claiming that this specific product, and all other Medtronic products that received federal Food and Drug Administration (FDA) approval, are shielded from state court lawsuits.

They tried, and failed, to gain such legal protection from the Supreme Court in 1996, but that was a different time and a different court. Ominously, the Bush administration's Solicitor General has filed a brief in the case in support of Medtronic.

On the other side, the influential New England Journal of Medicine says:

More News
"Ultimately, we believe that the pivotal question for the justices in Riegel v. Medtronic resides in what is in the best interest of American society. Is it in the people's interest to shield medical-device companies from product-liability claims? Would such a decision benefit patients by making more lifesaving medical devices available, or would there be adverse effects on the overall safety of devices? Is the FDA premarketing approval process sufficiently rigorous and comprehensive to justify immunization of the industry against tort claims? And if medical-device manufacturers are shielded from liability, what about drug manufacturers? Or would society be better served if patients retained their right to seek legal redress when they believed they had been damaged by a faulty medical device? In the long run, would this result in safer medical devices for patients?"

"But by rejecting Medtronic's plea for immunity, the Supreme Court can act now to protect patients." And that would be the right thing.