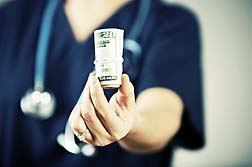 That is a prospect people with Anthem Blue Cross-Blue Shield insurance who visit Norton hospitals could face, according to a news article on WHAS 11 News. Norton has reportedly threatened to end their contract with Anthem if the insurance company does not increase their reimbursement rates. That could happen as soon as July 1, 2009 and it could result in Anthem members paying out of network fees for visiting any Norton hospital, not including Kosair Children's Hospital.

Anthem has said that an increase in reimbursement rates will only lead to higher costs for policyholders. So far, the dispute has not been resolved, but patients who are not aware of the situation could find themselves unexpectedly owing for visits to Norton hospitals if Norton cancels their contract.

Meanwhile, patients who are careful to go to an in network hospital may still be shocked by the medical bills they receive. This is because some services or service providers in hospitals may not be considered in network, even if the hospital is. In fact, it may even be that the doctor who performs your surgery is in network but the anesthesiologist who assists in your surgery is not. According to Health News, many anesthesiologists are sub-contractors, meaning you can be charged for their services.

This makes things difficult for patients. After all, how many people stop to think about whether their anesthesiologist is considered in network? Many people probably consider the doctor they will see and are careful to ensure that their doctor and surgeon are in network, but do not expect that they have to check on the anesthesiologist.

Patients who receive unexpected medical bills may have been subjected to what is known as "balance billing," in which the patient is billed for the difference between what the provider charges and what the insurer will pay. This can cause problems when the out of network service provider charges more than what the insurer is willing to pay for a procedure. For example, the provider may charge $100 for a service that the insurer values at $60. The insurer then will only pay a percentage of the $60, not of the whole $100—potentially leaving the patient paying the difference.

One reason why insurers may have undervalued the cost of medical care is that some used a company called Ingenix, Inc., to determine reimbursement rates for medical care provided out of network. The problem was that Ingenix was owned by UnitedHealth, creating a potential conflict of interest. Furthermore, officials alleged that health insurers intentionally skewed rates downward when reporting them to Ingenix, thereby undervaluing rates for medical procedures and resulting in lower reimbursements for patients.

The New York Attorney General's office investigated the situation and has announced settlements with some of the insurers involved, including UnitedHealth and WellPoint. A new, independent database to determine customer reimbursement rates is being developed. However, patients may still be owed money for medical bills they received for out of network services.

If you have suffered losses in this case, please send your complaint to a lawyer who will review your possible [Out-of-Network Overcharges Lawsuit] at no cost or obligation.
Request Legal Help Now