Kugel Mesh Patch: "I Can't Stress How Bad It Was"

Shelia J. had a terrible reaction to the Kugel Mesh Patch that was used in her surgery, one she thought she would not survive.

Shelia had ventral hernia surgery, and says the doctor told her he would use a mesh to repair the hernia [Kugel Mesh Patches were used in the repair of ventral hernias].

Shelia says after the surgery her belly started getting bigger. 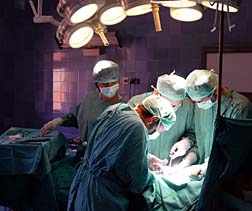 "The doctor took a needle at least six inches long and put it in my belly. You would not believe what he took from my belly—blood and pus. I had an infection. The doctor said I had a reaction to the mesh and I was admitted to the hospital immediately. The first thing next morning I went back into surgery and they removed the mesh and put something else in. I came out of the surgery and had tubes draining my belly for several days. There were all sorts of stuff draining out of my stomach for those days.

"After I went home, it was a good six months before I could do anything. It was at least two to three months before I was up on my feet. I had to heal from the infection and the two surgeries.

More KUGEL MESH News
"The pain was terrible. It was severe. Before the doctor tapped my stomach [using the needle], I felt like it was going to explode. I could feel it kind of pulsating, like an abscess. The tap relieved the pain a little bit, but it was still very painful. I did not think I was going to live through this. I was very sick.

"No human being, not even a dog, should have to go through what I went through. I strongly believe that. I can't stress how bad it was. That is no exaggeration. All that infection in my body was awful."

Patients have reported experiencing severe adverse reactions to the Kugel Mesh Patch. Some have said that their mesh has broken after it was implanted, causing chronic enteric fistulae, bowel perforations and other internal problems.

If you have suffered losses in this case, please send your complaint to a lawyer who will review your possible [KUGEL MESH Lawsuit] at no cost or obligation.
Request Legal Help Now