Kadant Composites LLC is Dead, but Kadant Inc. is Thriving

Since news spread that Kadant Composites had recalled certain lots of their GeoDeck composite decking due to deterioration, disgruntled consumers have been posting their stories and frustrations online for the entire world to see.

Their stories seem to have a familiar ring: decks proudly built with this new, environmentally friendly product made form recycled materials that would not rot or attract the mold sometimes inherent with wood. The decking material would also hold its color, and could be expected to far outlast any deck fashioned from wood.

The reality for many has been very different. Deck boards splitting, cracking or degrading after only a few years service. 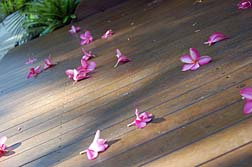 Kadant Composites Inc. recalled about 11,000 GeoDeck decking boards and railings in August of 2005 after a flood of complaints. The affected product was manufactured between April 2002 and October 2003 with insufficient antioxidants.

However, the company was aware of the problem well before that. In a story that appeared in the Boston Business Journal on October 28th 2004, officials of Kadant announced plans to sell its composite business—which it eventually did—because the composite business was not performing well, and dragging the company down.

The problem, CEO William Rainville said at the time, was a huge warranty hit related to failing composite decking products.

"Most of the composites loss was due to $4.6 million of warranty expense primarily related to a new problem concerning excessive oxidation that affects the integrity of the plastic used in some of our decking products," the Kadant Chief Executive said in a prepared statement three years ago. "We have decided to sell the composites business, and are in the process of evaluating potential buyers."

A buyer was found. Liberty Diversified Industries acquired the GeoDeck brand, and is actively marketing the product.

At the time Kadant's plans were announced, it was reported that the company became aware of the degradation problem the year before, in 2003—two years before the recall. And while Kadant lamented the $4.6 million lost to warranty claims, sales of GeoDeck were much higher. In 2004 it reported third-quarter sales of GeoDeck of $6.8 million, a 33 per cent increase in sales in the third quarter alone.

And yet, Kadant decided to sell.

On its warranty program [website], Kadant explains that it used the proceeds from the sale of their Composites division to pay warranty claims and other expenses. However, as of September 30th of this year Kadant Composites LLC had expended all of its funds and ceased operations, noting the warranty and recall programs have been terminated.

Any consumer clicking on this web site—which is linked from the Consumer Products Safety Commission (CPSC) website—would be forgiven for assuming that the company was gone, and they were out of luck.

However, what is not readily apparent is that while Kadant Composites LLC is no more,
Kadant Inc. is alive and well.

In June of last year, Kadant Inc purchased Jining Huayi Light Industry Machine Co. Ltd. of China for $10 million in cash and $10 million in debt acquired through the Bank of China. At the time of the acquisition, Kadant was reported as having 1400 employees.
Eighteen months prior, at the time Kadant Inc. announced its intent to sell Kadant Composites LLC in 2004, the company was identified as having about 1000 employees. Thus, it appears to have doubled its work force in three years.

This past spring Kadant subsidiary Kadant Black Clawson announced $28 million dollars in defined and pending contracts, heralded by Kadant Chairman and CEO Rainville as "...an outstanding start for our Asian business in 2007."

And in summer Kadant Black Clawson was awarded an $8 million dollar contract to design a film evaporating system for a pulp mill. That's the same subsidiary that landed $4 million in contracts from China in 2005.

Kadant Inc. is headquartered in Westford, Mass and Kadant Black Clawson is based in Mason, Ohio. The latter is a fiberline process equipment supplier that designs, manufactures, and services equipment used in paper recycling, chemical pulping, and paper machine approach-flow applications.

It is not known if LDI, which acquired the composites business and the GeoDeck name from Kadant for $12.5 million in October 2005, is responsible for warranty claims. There doesn't appear to be any language in the purchase agreement pertaining to warranty liabilities retroactive to the sale. Judging from the Kadant Warranty website, any warranty claims were tied to Kadant Composites LLC, which as the web site suggests, no longer exists.

Consumers with a GeoDeck complaint relating to the product originally recalled by Kadant in 2005 would need a legal opinion as to whether warranty response, or damages can be pursued from LDI, the new GeoDeck owner, or from Kadant Inc.

Nevertheless, if the Kadant Composites LLC warranty web site makes it appear that the company spent all its money and quietly went away, you are mistaken.

Kadant Composites LLC, the subsidiary is, indeed, no more.

But Kadant Inc. is still around, and doing just fine.

If you are a homeowner, commercial building owner or represent a homeowner's or town home association and have suffered damages in this Kadant Composite Geodeck case, please contact a lawyer involved in a possible [Kadant Composite Lawsuit] who will review your case at no cost or obligation.
Request Legal Help Now

Posted by
Koh Han Seow
on April 22, 2012
I purchased a home in 2010 with deck built with Geodeck product. The deck cracks in many places and in horrible condition. I have been asking around and only was told last weekend that the deck materials are Geodeck product.

Is there any legal avenue I have to claim damages from Kadant? Thank you for any information you can offer.

Posted by
Renee Denkenberger
on May 9, 2011
I purchased GeoDeck in 2002. My deck is flacking and showing signs of deterioration. Has there been any updates with the Kadant Composite Lawsuit? Thank you for any information you may have or can offer. Renee