The Real Deal is a Raw Deal: California IT Overtime

If you are a California software developer, or a California computer professional of any kind this will come as no surprise to you. However this may come as a shock to anyone who isn't a part of the IT world and not conversant with the California IT overtime issue. And if you have a computer IT friend, ring him up and talk some sense into him. 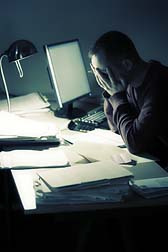 California Assembly Bill 10 went into effect last October, in a move that was said to 'simplify' procedures for the typical California IT employer. California labor law dictates that most California IT workers up to a certain hourly wage have the right to overtime pay for work performed beyond the standard 40-hour week. Some jobs are classified as exempt from overtime pay—and to be fair many of the latter jobs command such a high rate of pay that overtime is the last thing on anyone's mind.

However, many employers attempted to circumvent the system and basic fairness by misclassifying employees in a bid to avoid paying overtime. The employers also seemed to have the ear of California state legislators. Over the past couple of years the threshold for overtime exemption has been lowered, to the point where employees are required to pay fewer employees overtime and those that do qualify, do so at a lesser rate.
That's more money in the pocket of the employer.

In October, the IT bosses got their trump card: an amendment to California labor law that literally strangles the chance for overtime with a $75,000 annual salary threshold. "Practically speaking," said Joystiq's Law of the Game author Mark Methentis, "that means that if you're a dev [sic] with a salary of $75K, you can't claim overtime during crunch, which means the developer is more likely to use crunch cycles."

The software developer knows all about 'the crunch.' That's when you're in the midst of developing a game, or a new software product that is giving you problems. With a shipping deadline looming, 'the crunch' is a series of long days where the team bands together for a major push to deliver the product on time and bug-free.

Now, let's go back to 2004—a time when California labor laws favored the hard-working IT professional. Employers were still trying to cheat their employees out of overtime, but at least the software developers had some robust provisions in California labor law regarding overtime.

Five years ago an essay under a pseudonym quickly made the rounds in the IT world. It was written, as it turns out by Erin Hoffman. Her spouse was employed by a computer game designer and was made to work insanely long hours without a lick of compensation. She was worried about his health, not to mention the capacity for an employer to mandate such a work schedule.

Most in the IT industry understand the need for an occasional 'crunch'—especially when the unforeseen happens. However, in this case the crunch seemed to go on forever and only worsened as the weeks went by.

At one point Hoffman's husband and his colleagues were made to work 12-hour days, 7 days a week—with an occasional Saturday evening off, "for good behavior…

"The stress is taking its toll," Hoffman wrote at the time. "After a certain number of hours spent working the eyes start to lose focus; after a certain number of weeks with only one day off fatigue starts to accrue and accumulate exponentially. There is a reason why there are two days in a weekend -- bad things happen to one's physical, emotional, and mental health if these days are cut short. The team is rapidly beginning to introduce as many flaws as they are removing."

Those who work in the IT field and understand the occasional need for crunch time, also understand what being a 'salaried' employee means. Translation, no right to overtime pay. For the privledge of being paid a set salary (and usually, salaried employees are at the higher end of the pay scale), you can expect to work some long hours when the need arises.

However, usually there is a balance to that: the chance to enjoy a bit of down time, or work less hard during a lull in the action. It goes both ways.

In the case of Hoffman's hard-working spouse there were no such provisions for balance. No overtime was offered, nor was compensatory time off. What's more, a previous practise of allowing employees to take accrued time off in a block at the conclusion of a long project, no longer applied.

In all fairness, critics suggest that the actions of Hoffman's employer at the time, together with the allegations of inhumane work hours and the sheer scope of excessiveness on the part of Electronic Arts in 2004, remains an isolated incident.

More CALIFORNIA IT OVERTIME News
At the same time, industry insiders are worried that the $75,000 annual salary exemption threshold will allow more employers to work their employees to the bone, well beyond the standard work week, without having to give a second thought to overtime pay. Without being saddled with the worry of an overtime budget mushrooming and taking away his profitability, an employer only has two things to worry about: having someone quit, or someone drop dead.

Perhaps there's a third worry. Provided scenario #2 above doesn't happen, the employer could be facing a lawsuit brought by a savvy California software developer suspicious over the denial of his right to claim California IT overtime. Insomuch as California state legislators have caused you to lose ground, there are still labor laws protecting the California computer professional. Use them—and call that lawyer to make sure you are getting your due.

READ ABOUT CALIFORNIA IT OVERTIME LAWSUITS

If you have suffered losses in this case, please send your complaint to a lawyer who will review your possible [California IT Overtime Lawsuit] at no cost or obligation.
Request Legal Help Now