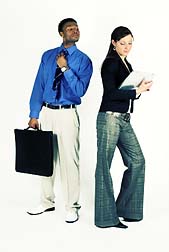 The plaintiff, Kathy Lawlor was awarded $1.8 million after a jury found that her former employer, North American Corp., managed to obtain a copy of her telephone records without her authorization. According to an article in the Chicago Tribune (October 18, 2009), North American was able to obtain those records through something known as "pretexting," obtaining confidential information under false pretenses. In this situation, someone phoned Lawlor's telephone carriers, pretended to be her, and requested phone records.

The jury found that this action constituted an invasion of privacy, although North American has said that it was investigating whether or not Lawlor was stealing business from the company.

According to the Tribune, Lawlor was followed by a private investigator after she was fired from her job on June 15, 2005. Shortly after she was fired, she was allegedly told that she owed her former employer $20,035 for overpayment of commissions. At that point, she filed a lawsuit against North American. After a private investigator left some paperwork in the trash can of Lawlor's neighbor, Lawlor's attorney determined that her former employer had obtained her phone records.

Lawlor's lawsuit against North American was then broadened to include invasion of privacy, based on the attempt "to fraudulently obtain her cellular phone records." To obtain those records, investigators were given Lawlor's address, Social Security number, phone numbers and birth date.

The judge determined that Lawlor owed North American $78,781 in commissions and $551,467 in punitive damages. Lawlor still comes out ahead by over $1 million, however both sides may appeal the verdicts against them.

If you have suffered losses in this case, please send your complaint to a lawyer who will review your possible [Illinois Employment Lawsuit] at no cost or obligation.
Request Legal Help Now

Posted by
Kelly Yasin
on August 3, 2016
After being attacked outside of work, my employer disclosed to multiple other employees in detail about my attack and injuries.