The Hydroxycut recall announced yesterday over concern for Hydroxycut liver damage not only serves to mount concern over the Hydroxycut supplement; it also raises the issue of regulatory limitations. The US Food and Drug Administration (FDA), which warned consumers about the dietary supplement yesterday, does not carry the same degree of authority it has over pharmaceutical drugs. But first, a word about the Hydroxycut diet supplement. 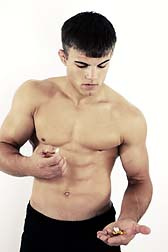 The product, which is popular both for people who want to lose weight and bodybuilders who want to shed pounds to increase the cut of their physique, is a dietary supplement manufactured by a Canadian company. Iovate Health Sciences Inc. of Oakville, Ontario agreed to recall Hydroxycut products from the market, although Hydroxycut Cleanse and Hoodia products were not included in the recall.

The concern has to do with the potential for liver injury and problems impacting the liver. The FDA reports 23 incidents of serious health difficulties ranging from jaundice to elevated liver enzymes, an indicator of liver injury.

In the most serious cases the liver can be compromised to the point of requiring a liver transplant.

There has been one death. While liver damage is rare, it can happen. The FDA notes that affected consumers were healthy before starting Hydroxycut, and had taken the recommended dose.

"The FDA urges consumers to discontinue use of Hydroxycut products in order to avoid any undue risk," said Linda Katz, M.D., interim chief medical officer of the FDA's Center for Food Safety and Applied Nutrition, in a statement. "Adverse events are rare, but exist.

"Consumers should consult a physician or other health care professional if they are experiencing symptoms possibly associated with these products."

The Hydroxycut line includes various products ranging from pills, to drinks and powders designed to increase energy, burn calories and fat, as well as control appetite. There is little doubt they are popular, with the manufacturer reporting sales of nine million units last year.

However, consumers should know that the FDA's jurisdiction over dietary supplements, as compared to its authority over pharmaceutical drugs, is vastly different. This latest issue involving a basket of Hydroxycut products re-ignites a long-simmering debate with regard to regulatory oversight for the dietary supplement industry.

The difference is best illustrated by the way in which the two product camps are defined, according to a report appearing this morning in the New York Times. Pharmaceutical drugs have a mandate to prevent or cure disease and manufacturers are required to provide data outlining the potential for safety and effectiveness prior to being granted FDA approval.

Dietary supplements, on the other hand can offer general health benefits but can't claim to treat specific disease or symptoms. As such, the manufacturers themselves are responsible for the policing of its own products as to the documentation of safety and efficacy claims.

By law the FDA is only allowed to act when the agency identifies a harmful or adulterated product already on sale.

"Part of the problem as you know is that FDA looks at dietary supplements from a post market perspective, so that an isolated incident is often difficult to follow," Dr. Katz said Friday in remarks published in the New York Times.

However John Hathcock, vice president of scientific and international affairs at the Council for Responsible Nutrition—a trade group—counters that neither drug makers nor supplement manufacturers could ensure total product safety once an item moved from a testing lab into mass circulation.

"Nobody goes to market without testing."

One woman writes in a blog that she used Hydroxycut for weight control about two years ago and while stressing that it worked for her, she also felt like a slave to the drug.

"I took Hydroxycut in Summer 2007. I lost about 15 pounds and kept it off as long as I was taking the pill. I didn't want to keep on splurging on it so I decided that I was going to be able [to] keep off the weight on my own without any pill. So I stopped in November of that year. In December I felt like a drug addict going through rehab. I felt like my system was clashing, my metabolism slowed down so much! I gained 20 pounds."

Besides potential injury to the liver, other complications are said to include heart problems and rhabdomyolysis, a kind of muscle damage that could potentially lead to kidney failure.

It has been reported that Vitamin Shoppe and GNC stores were removing the cited Hydroxycut products from their Web sites and retail outlets.

The FDA was quick to point out that the formula for Hydroxycut had changed over time. Because the product contains different amounts of a proprietary blend of ingredients, the FDA says that as of yesterday it had not yet determined which Hydroxycut ingredients could potentially constitute a health hazard.

While the dietary supplement industry is of the view that current regulations are adequate to protect consumers, the FDA has undertaken a campaign to identify and warn consumers about problematic weight-loss pills that illegally contain prescription dug ingredients.

Since Christmastime, the FDA has identified a list of 70 brands that were found to contain hidden, or potentially hazardous drugs.

More HYDROXYCUT News
The Hydroxycut recall is just the latest salvo in the effort to provide a greater degree of oversight with regard to the dietary supplement industry within the parameters of current regulations. To that end it was reported that a new law requiring manufacturers to notify the FDA of serious health problems helped identify a pattern of adverse events linked to Hydroxycut clients. The FDA also cited 6 reports of serious liver disease appearing in various medical journals.

For now the FDA is hoping to limit Hydroxycut liver damage by issuing the health warning with regard to the identified Hydroxycut diet product and the manufacturer's recall of the specific lots of Hydroxycut supplement. A complete list of recalled product can be found elsewhere on this site.

If you report symptoms ranging from jaundice and brown urine, to nausea, vomiting, light-colored stools, excessive fatigue, weakness, stomach or abdominal pain, itching and loss of appetite, you should see a doctor about potential liver damage. You may also wish to consult a Hydroxycut attorney to explore your options.

If you have suffered losses in this case, please send your complaint to a lawyer who will review your possible [Hydroxycut Lawsuit] at no cost or obligation.
Request Legal Help Now