News about contaminated heparin continues to be released as more people come forward to report their experiences. Heparin-related illness affects people from many walks of life, young and old, and is not isolated to people who received Baxter-made heparin injections.

According to West Palm Beach News, a Florida family filed a lawsuit alleging their son, a 20-year-old leukemia patient, was given contaminated heparin syringes. The young man was given a bone marrow transplant in 2006 and began a treatment of heparin and saline solution. 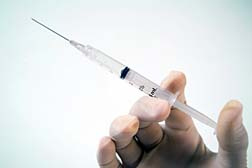 The patient's syringes were contaminated with serratia marcescens, a dangerous bacteria. As a result, bacteria got into his blood stream, he suffered sepsis and meningitis and lapsed into a coma. He has suffered brain damage and currently requires 24-hour care. The contaminated syringes, the "Sierra Pre-Filled Syringe" by AM2PAT, were recalled in December 2007 after the FDA learned the company did not ensure necessary sterility of pre-filled syringes.

There are many patients like this young man who are continually on intravenous treatments and require heparin to prevent clots from forming on the IV line.

Other lawsuits have already been filed against Baxter International Inc and other companies that make and distribute heparin. One such lawsuit was filed in Chicago by the widower of a woman who died during kidney dialysis. The woman experienced nausea and vomiting following the start of a dialysis treatment and died of an air embolism to the heart.

Recently, the FDA increased the number of deaths of patients who took heparin to 149. In all cases listed, patients suffered symptoms after exposure to contaminated heparin. Such symptoms include extreme allergic reactions and difficulty breathing. That number is probably much higher, since not all deaths associated with a drug are reported to the agency.

More HEPARIN News
Many people have written to LawyersandSettlements.com to report the deaths of loved ones—fathers, mothers, siblings, spouses, sons and daughters—after exposure to heparin. They are understandably shocked by the sudden death of their family members and are having trouble understanding how contaminated heparin could have made it into the medical system.

Heparin was recalled earlier this year after the FDA discovered an unidentified foreign substance in the drug. That substance was identified as low-cost animal cartilage.

Many more lawsuits will likely be filed in the coming months as people realize that their health problems may have been caused by contaminated heparin injections or heparin-coated devices. If you or someone you love was injured by contaminated heparin, you may be eligible to file a lawsuit against Baxter or other heparin makers. Contact a lawyer to discuss your legal options.