If you thought that you were safe from Heparin just because you did not receive a Heparin injection, you could be in for a rude awakening. Heparin is used to coat some medical devices and that coating has now been linked to almost 100 adverse reactions, including 11 deaths. Patients who have been exposed to Heparin-coated devices are now investigating lawsuits, alleging that their adverse reactions were caused by the medication. 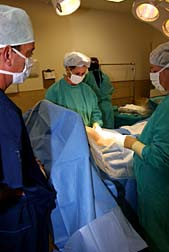 According to the FDA there are a number of severe complications associated with the use of Heparin-coated medical devices, including "severe allergic reactions, gastrointestinal symptoms (nausea, vomiting, abdominal pain and diarrhea) and/or very low blood pressure." The FDA notes that most of the adverse event reports it received involved the use of Heparin lock flush solutions. However, other devices also reported include "Heparin-coated oxygenators and circuits used during cardiopulmonary bypass procedures and Heparin-coated vascular grafts."

The FDA has also announced that Heparin contamination could result in inaccurate test results from diagnostic devices that either monitor Heparin or contain it.

Recently, the FDA announced that Heparin was linked to 149 deaths allergic-reaction deaths, up from the 81 the agency said it knew of in April. In all, the FDA has received 246 reports of death related to Heparin since January 1, 2007. The highest number of reported deaths came in January and February 2008, when 99 deaths occurred.

Heparin was recalled earlier this year after it was learned that the drug was contaminated with oversulfated chondroitin sulfate. It is used on medical devices to prevent blood from clotting on the devices. Companies such as Medtronic, that make medical devices coated with Heparin, have recalled those products.

Meanwhile, every day more complaints come in to LawyersandSettlements.com regarding Heparin. One such person, a man from Missouri, says that his wife died of HIT [Heparin-Induced Thrombocytopenia] following heart surgery. He notes that her kidneys and liver both shut down and, had she survived, she would have had her hands and feet amputated as a result of her ordeal.

More HEPARIN DEVICES News
Other people write in to say that their loved ones died following an allergic reaction to Heparin—in many cases the death was a complete surprise because the person had been in good health prior to heparin exposure. Still others write about their personal experiences, including one man who says his serious reactions to Heparin included, "…difficulty breathing, nausea and rapidly falling blood pressure that led to life-threatening shock."

Some people are still trying to determine whether or not their loved ones were given Heparin or used a device coated with it. They say that their loved ones' experiences are very similar to those who died after exposure to Heparin, so they feel it is likely that they were exposed to the drug in some manner.

Patients who were exposed to Heparin, either through injections or through devices coated with the medication, are now investigating lawsuits against the maker of Heparin, alleging the drug caused their serious reactions. If you or someone you love was harmed by the use of Heparin or Heparin-coated devices, contact a lawyer to discuss your legal options.

If you have suffered losses in this case, please send your complaint to a lawyer who will review your possible [Heparin Devices Lawsuit] at no cost or obligation.
Request Legal Help Now