Following the Heparin contamination that was allegedly associated with numerous deaths and adverse reactions, patients have wondered whether their Heparin injection, or their exposure to Heparin syringes, might have resulted in their own adverse reaction. Meanwhile, spouses whose loved ones died after being exposed to Heparin are filing lawsuits alleging the makers of Heparin knew or should have known about the Heparin contamination. And, although it is now known what substance was involved in the contaminated Heparin, there are still questions about how this could have happened. 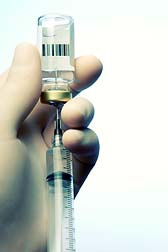 Furthermore, according to Woodcock, "Oversulfated chondroitin sulfate is not an approved drug in the US, nor should it be present in Heparin." However, the FDA's analysis suggested that the contaminant accounted for between 2 percent and 50 percent of the total content of the active pharmaceutical ingredient in some samples.

There are questions that must be answered now that the contaminant is known. First, why was oversulfated chondroitin sulfate used in the first place? Second, how much did the manufacturers know about the use of the contaminant? If they did not know about it, should they have?

The answer to the first question might be as simple as money. Oversulfated chondroitin sulfate is less expensive to make than Heparin, which is made from pigs intestines, so a company looking to save money, might choose to use it instead of the Heparin, especially since it is so easily mistaken for Heparin. In fact, according to one lawsuit, the difference in price between Heparin and OSCS is almost $900.

More HEPARIN News
The lawsuit was filed in February, 2009, and alleges that Baxter, maker of Heparin, substituted Heparin with OSCS to save money. In fact, the lawsuit states that while OSCS costs $9 to produce, Heparin costs $900 to produce, making OSCS an attractive and much less expensive product. The class action lawsuit was filed on behalf of 28 people whose spouses died after they were exposed to Heparin.

Following the Heparin recall, the US Food and Drug Administration (FDA) visited the plant in China where Heparin is produced. The FDA found violations including incomplete inventory records, incomplete manufacturing instructions and a lack of critical processing steps identified for Heparin Sodium USP process.

The lawsuit accuses Baxter of "reckless indifference to the interest of others," and alleges that the Heparin was unreasonably dangerous, defective and unfit for intended uses. Furthermore, plaintiffs claim that Baxter wrongfully allowed the contaminated Heparin to be put on the market and breached express warranties that Heparin did not have dangerous side effects.