Contaminated Heparin Deadly to Some

When it comes to the heparin recalls, it appears that what you don't know really can hurt you. After all, patients thought they were getting their normal dose of heparin only to find out that they may have been exposed to contaminated heparin, either through the replacement of a heparin ingredient or through the manufacture of heparin at an unsanitary plant. Although the recalls are over, lawsuits against the makers of heparin are now piling up. 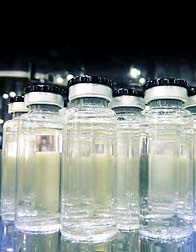 Lawsuits have been filed against Scientific Protein Laboratories, maker of heparin, and Baxter International Inc, heparin distributor, alleging contaminated heparin was responsible for harm caused to patients who received contaminated heparin. One such lawsuit was filed on behalf of the estate of a man who died shortly after being exposed to tainted heparin. The man was rushed to hospital after experiencing adverse symptoms but died shortly after being admitted to hospital.

Meanwhile, a different lawsuit was filed by a man whose wife died after she was exposed to heparin during hemodialysis. The lawsuit alleges that Baxter Healthcare Corp. did not adequately warn patients about potential adverse reactions to the drug until after the woman died. The suit seeks damages in excess of $75,000.

According to an article at toledoblade.com (February 15, 2008), the lawsuit notes that approximately 40 percent of the adverse events reported were categorized by the FDA as being serious.

More HEPARIN News
Heparin that was manufactured in China was reportedly improperly manufactured, with the active ingredient, heparin, replaced with over-sulfated chondroitin sulfate, a product that appears like heparin but can cause serious adverse reactions. A possible reason for the switch is that heparin, made from the mucosal lining of pig intestines, became expensive to manufacture after a rare disease. Over-sulfated chondroitin sulfate was less expensive and apparently undetectable, until patients became ill from exposure to the product.

Reactions to the tainted heparin varied from stomach pain and vomiting to anaphylactic shock and death. Patients may have been more vulnerable to an adverse reaction because in many cases, the heparin was received as part of a medical procedure, including dialysis and blood transfusions.

People who think they or their loved ones may have been harmed by heparin can check their billing records to see if they were exposed to the blood thinner.