While scientists close in on the identity of a mystery contaminant that's been showing up in tainted heparin from China, one thing is becoming increasingly clear: that the mystery substance was mixed in with the real thing to increase yield.

"A child could tell you it's counterfeiting," observed Dr. Jawed Fareed, professor of pharmacology at Loyola University in Chicago. His comments appeared this morning in the New York Times.

The heparin scare has rocked the medical community over the last month after hundreds of adverse reactions, and several deaths have been linked to the blood thinner originating from China. Eighty adverse reactions were reported to the US Food and Drug Administration (FDA) from German health authorities. 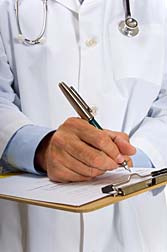 One of the largest suppliers of the global heparin supply, Baxter International, recalled nearly all of its heparin products from the market pending further investigation.

Initial suspicion centered around a supplier to Baxter, Scientific Protein Laboratories (SPL), an American company that has controlling interest in Changhzou SPL, a China-based plant that processes much of the raw heparin that Baxter later refines into the end product. While SPL claimed that it only acquired raw heparin from reliable sources, at least one operator of an unlicensed heparin sweat shop in China reported in February that she had sold raw heparin directly to an SPL supplier, and to SPL directly, on two separate occasions.

Scientific Protein Laboratories, the Wisconsin-based company whose Chinese plant allegedly produced the active ingredient in the tainted product, is conducting an independent investigation.

Heparin is made from the intestines of pigs, and while there are licensed producers in China, there is also a plethora of unlicensed sweatshops in small, private houses throughout China that also produces raw heparin. An American reporter toured one of these facilities early in the New Year and found conditions to be anything but pristine.

Additionally, an outbreak of blue ear pig disease last year severely depleted stock. That fact raises not only a concern for contaminated heparin coming from diseased stock, but provides an impetus for the counterfeiting that is only now coming to light.

While scientists have yet to conclusively identify the counterfeit substance that has been found to comprise almost 20 per cent of the real thing, they now have a likely suspect: over-sulfated chondroitin sulfate. Standard testing techniques did not turn up any abnormalities concerning the chemical footprint of Chinese heparin. However, more sophisticated testing uncovered a potential counterfeit.

The FDA currently has a handful of scientists, which it describes as the world's foremost experts on heparin, doing ongoing analysis in several different locations in an attempt to verify the suspected counterfeit.

In its day job, chondroitin is widely used to treat joint pain, and in its original state does not have blood-thinning properties. However, the suspicion is that a molecular change to the chondroitin formula somehow affords the altered substance blood-thinning capacity.

Chondroitin sulfate is derived from animal cartilage, and according to an unidentified chemist quoted in the New York Times this morning, presents structural similarities to heparin. This fact is borne out by Professor Zhang Tianmin, who is retired from the Shandong University School of Pharmaceutical Sciences, who noted that chondroitin sulfate, or chitosan—a derivative from shellfish—would be candidates for a heparin mimic.

He says they are also cheap. However, Professor Tianmin goes on to say that since neither substance has natural blood-thinning properties, something would have to be added to it that does.

As the sleuthing continues, it is still unknown whether the alleged China-based counterfeiting of the nation's heparin supply has been done to augment short supply of heparin stemming from the blue ear pig disease epidemic, or simply from greed.

However, it is telling that of the seven or eight batches of heparin Dr. Fareed has tested, six were contaminated. "And these were used by doctors at the Loyola University Medical Center," he told the New York Times. Dr. Fareed believes the quality problems related to heparin are more widespread.

Judging from the response of various agencies, the heparin issue is being taken very seriously. The FDA, which hadn't inspected the Changzhuo SPL plant prior, or since giving the go-ahead for heparin production in 2004 (a violation of its own policy), has since inspected the plant, and has indicated that a tour and inspection of some of the unregulated heparin houses is in the offing.

And it was reported that Chinese drug regulators made a surprise visit to Guanglong Biochemical, a factory located in eastern Shandong Province. The president of the firm, Tang Haitao, indicated in comments appearing in the New York Times this morning that he told regulators he no longer produced heparin.

More News
As the world holds its breath, medical authorities maintain that there is enough supply of untainted heparin out there to satisfy demand. Meantime, the work continues. Dr. Jawed Fareed of Loyola University says that while contaminated heparin is suspected for eliciting adverse reactions in heparin patients, some batches containing the yet-to-be-identified contaminant did not elicit adverse reactions in patients.

It's a confusing time in the heparin world.

Still, says Dr. Fareed, in comments published this morning, "This is a deliberate act of chemically manipulating a heparin-like substance, and mixing it with heparin to increase the yield."

As the focus turns again to China in yet another tainted-product scandal (pet food, toothpaste, lead content in toys), the pressure to reform the FDA and achieve better standards of testing and due diligence regarding imported products and raw materials continues to build. That pressure will also likely be felt in the courts as the heparin picture becomes clearer, and patients adversely affected, or the families of those who have died, seek compensation for their loss and suffering.