Four soldiers who died August 19 in a helicopter crash have been identified. As it turns out the four killed in the military helicopter accident were four members of an elite special operations unit. Needless to say, the helicopter crash news was devastating not only to the families of those killed, but to the military as well. 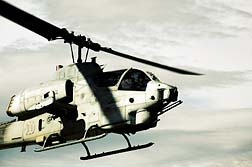 The helicopter crash victims were identified by the Associated Press (AP) as Chief Warrant Officers Terrance Geer, 40, of Casper, Wyoming, and Robert Johnson, 41, of Seattle, Washington. Staff Sargeants Paul Jackson, 33, of Lancaster, Maryland, and Chad Tucker, 28, of Titusville, Florida, were also among the victims.

The crash happened Wednesday in Colorado. AP reported Army Special Operations Command officials as stating an MH-60 Black Hawk helicopter crashed while in the throes of mountain and environmental training near Mount Massive, the second-highest summit in Colorado.

So far, there has been no cause established for the crash.

The four soldiers who died in the helicopter crash Wednesday were members of the Fort Campbell-based Delta Company, 1st Battalion, 160th Special Operations Aviation Regiment. The elite entity was created more than 20 years ago after a failed mission to rescue hostages in Iran.

The special operations unit uses the cover of nightfall and keeps low to the ground to avoid radar detection. Pilots often navigate through enemy territory and bad weather to safely deliver and retrieve soldiers.

Some of the military's best helicopter pilots call the special unit home, and focus on delivering Special Forces Soldiers, Army Rangers and Navy SEALS into some of the most dangerous areas of the world for covert operations.

AP was reporting today that each of the highly decorated soldiers had extensive combat experience and had completed the Army's most rigorous training programs.

More HELICOPTER CRASH News
Many will remember the fate of two helicopters piloted by Night Stalkers that were shot down in Mogadishu in 1993, during fighting in Somalia. The rescue was chronicled in the book—and subsequent movie—'Black Hawk Down.'

It is not clear if the crash happened at nightfall or what the weather conditions might have been at the time of the crash.

This is not the first helicopter crash involving the elite unit, which has had a large role in Iraq and Afghanistan.

In 2005, eight members were killed along with eight Navy SEALs after their MH-47 Chinook helicopter was shot down by a rocket-propelled grenade. More recently, five Night Stalkers were among eight service members killed in February, 2007, when a Chinook crashed in southern Afghanistan.