Last week's helicopter crash that occurred when a Marine helicopter crashed with a Coast Guard plane off the coast of California has become a recovery effort, now that the search for survivors has been called off. Helicopter crash victims, as well as those aboard the doomed plane, have yet to be found. 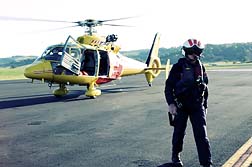 A total of seven members of the US Coast Guard and two Marines have been missing since a Coast Guard C-130 transport plane and a Marine Corps AH-1W Super Cobra helicopter collided in a ball of fire off the coast of Sacramento late Thursday. According to a report this morning in The New York Times, the plane had been dispatched to search for a 50-year-old man who had been reported missing in a 12-foot dinghy.

The Marine helicopter, meanwhile had been escorting transport helicopters on a nighttime training exercise.

The collision occurred in the early evening Thursday. Ian Gregor, a spokesman for the Federal Aviation Administration (FAA), said in a statement that FAA air traffic controllers had spoken with the plane several minutes before the collision and had instructed the pilot "to communicate with military air traffic controllers at Naval Air Station North Island in San Diego Bay." He did not know if the Coast Guard pilot had a chance to follow through.

More HELICOPTER CRASH News
Yesterday, military officials issued a statement saying that they did not expect to find any survivors. After searching 644 square miles of ocean, efforts have now been refocused from a rescue operation to a recovery of debris and remains. As of this morning officials were combing through a debris field of some 50 miles off the coast of San Clemente Island, the latter identified as a staging area for military aircraft.

The crewmembers aboard the Marine helicopter were Maj. Samuel Leigh, 35, Belgrade, ME and First Lt. Thomas Claiborne, 26, Douglas, CO.