Helicopter Crash Kills One On Ground

As the person standing firmly on the ground, you don't often expect that you will be injured by a helicopter crash. However, unfortunately that sometimes happens: a person who is not even on the aircraft is the one seriously injured in the helicopter accident.

A helicopter crash earlier this month took the life of a man who was on the ground beneath the helicopter. High winds likely contributed to the crash, in which the helicopter spiraled out of control. The helicopter had been stringing power lines between poles when a gust of wind hit it. 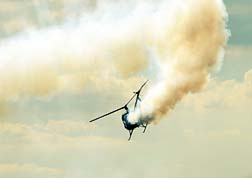 The experimental helicopter, a Kaman K-1200 Kmax, was owned by Swanson Group Aviation LLC. The force of the accident left the helicopter broken in half.

Meanwhile, a helicopter crashed into the Gulf of Mexico, killing at least 4 people and leaving 1 other missing. The helicopter was flying to an unmanned oil platform approximately 20 miles offshore when it crashed. The Coast Guard began a search and rescue mission when the helicopter leasing company reported that its pilot had not checked in as scheduled.

The National Transportation Safety Board and the Federal Aviation Administration are investigating the crash.

Helicopters can be dangerous because they fly into areas that planes and other vehicles cannot make it into. They can hover, they can fly low to the ground and they can be used to transport heavy machinery and other materials. Helicopters can be of great value—but they can also be deadly.

Flying into difficult terrain also means that helicopter pilots must be careful of many obstacles, including power lines, towers and sudden peaks. It also means that people on the ground are at risk of being injured, or killed, if something goes wrong. And, sadly, sometimes things do go terribly wrong.

More HELICOPTER ACCIDENT News
Legislators in Maryland are hoping to prevent the worst from happening by overhauling the state's medevac system. The lawmakers plan to introduce legislation that would impose national safety standards on the system and would create a department to oversee emergency services. The move comes after a medevac helicopter crash killed 4 people and seriously injured a fifth. Recent findings suggest that Maryland could actually run fewer medevac flights without lowering their survival rates.

Changes to the system would involve having 2 medical crew members on every flight, rather than the 1 used now, meeting national accreditation, meeting Federal Aviation Administration Standards and having 2 helicopter fleets—1 for law enforcement and 1 for emergency medical services.

Although these moves will not bring back people who were killed in the accident, they may prevent more lives from being lost in the future.

If you have suffered losses in this case, please send your complaint to a lawyer who will review your possible [Helicopter Accident Lawsuit] at no cost or obligation.
Request Legal Help Now