Imagine surviving a car accident only to be involved in a fatal helicopter accident moments later. Following the trauma of the car accident, you are probably in a bit of shock but are grateful to be alive and seemingly unharmed. Then, emergency personnel tell you that you will be taken via helicopter to a trauma center so you can be thoroughly checked out. Probably the last thing on your mind is the risk of a helicopter crash, but, based on recommendations from the National Transportation Safety Board, a helicopter crash may be more likely than you would expect. 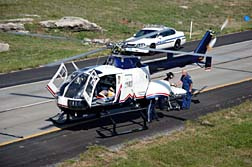 That is exactly what happened to Jordan Wells, who, following a car accident, was being taken via helicopter for medical treatment when she was involved in the helicopter crash. Four people died in that crash—Wells survived, but suffered serious injuries.

Wells had been driving her car on September 28 when she lost control of it, resulting in a car accident. Neither Wells nor her friend suffered obvious trauma in the car accident but emergency medical personnel determined that they could be at risk of internal injures, based on the extensive damage to Wells' vehicle. So, it was determined that they would be airlifted via helicopter to a medical center.

According to the Associated Press, Wells lost consciousness prior to being thrown from the helicopter in the crash. However, she says she remembers the sound of the helicopter clipping tree branches just before she passed out. When she came to she was on the ground and says she was in the worst pain in her life. Although Wells survived the crash, she suffered a broken neck and had her right leg amputated below the knee. She also underwent multiple surgeries. Wells' best friend, who was also in the helicopter, did not survive the crash.

Wells will now undergo 6 to 12 months of rehabilitation and will be fitted with a prosthesis so that she can walk again. However, the emotional scars of what she has been through will likely last a lifetime.

Since the tragic helicopter crash, there have been fewer patients taken by helicopter to hospitals in Maryland. Experts are now trying to determine whether the decision not to fly patients in 169 instances in which helicopter transport was initially requested was due to "skittishness" among ambulance crew, resulting in patients not receiving much-needed medical care.

The National Transportation Safety Board (NTSB) is obviously concerned about the risks associated with Emergency Medical Services (EMS) flights. Among the agency's most wanted improvements are safety improvements to EMS flights. Actions that the NTSB would like to see to improve EMS safety include all-terrain warning systems on helicopters and flight risk evaluation programs.

More HELICOPTER CRASH News
Meanwhile, a helicopter crash in Arkansas has taken the life of a state conservation officer. The crash occurred when the officer and a pilot took the helicopter to patrol for hunters violating a ban on nighttime deer hunting. The officer apparently believed hunters were out that night and was trying to prevent the illegal activity when the helicopter crashed into a cow field. The helicopter's pilot was injured in the crash, although his injuries are not considered life-threatening.

Because helicopters are used in life-saving transports and to help officers uphold the law, many people might assume that they are a very safe way to travel. However, there is a lot that can go wrong in a helicopter flight—from pilot error to improper maintenance to poor weather—that can seriously affect the flight. Although Jordan Wells survived her ordeal, many people do not.