In releasing its list, the NTSB noted that there have been 9 accidents involving medical evacuation helicopters in the past 11 months. Those 9 accidents resulted in 35 fatalities. 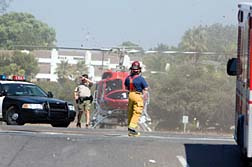 According to the Associated Press, a federal safety panel has shown concern that aviation officials have not moved quickly enough on proposals designed to improve the safety of EMS helicopter flights. The NTSB panel recommended back in 2006 that the Federal Aviation Administration (FAA) implement measures to prevent crashes but the FAA has not yet taken those steps.

The NTSB's recommendations include installation of a Terrain Awareness Warning System in helicopters to warn pilots that they are in danger of crashing into the ground, stricter safety rules for EMS flights carrying only medical personnel, a formal flight risk evaluation before each EMS flights and formalized dispatch procedures including weather information and flight risk-assessments. According to the NTSB, if these rules had been followed, between 10 and 25 EMS crashes that occurred from 2002 to 2005 could have been prevented. In total, there were 55 EMS crashes in that period.

According to Jeffrey Guzzetti, deputy director of the NTSB's aviation division, speaking to USA Today, most of the recent accidents occurred at night, in poor visibility or in bad weather. He further said that although the FAA has made progress on some of the recommendations, none has yet been fully put in place.

Helicopter crashes have been in the news frequently lately, thanks to a few high-profile EMS crashes, including one that took the lives of three adults and one 14 month old. The accident occurred when the helicopter struck a radio tower and crashed, although the NTSB is not yet certain what caused the helicopter to hit the tower. An NTSB report on the accident found no indication of helicopter malfunction or of a lighting problem on the tower. The NTSB is now looking into the pilot's history, including his duty time and his 3-day history prior to the crash.

Although people may believe helicopters are safer than planes, in fact, helicopters tend to have high accident rates. The belief that helicopters are safer than planes may be due to the fact that very few helicopter accidents make national headlines. Helicopters carry fewer people than many planes and there would have to be something exceptional about the crash to warrant national headlines. However, because of the recent spate of EMS crashes, and a crash in California that killed 9 firefighters, helicopter crashes are currently being covered more heavily in the news.

More HELICOPTER CRASH News
And, before you say that only 9 helicopter crashes in 11 months is not a bad record given how many helicopter flights there are each day, keep in mind that actually only refers to 9 EMS helicopter crashes. There have been other fatal helicopter crashes this year that do not involve EMS helicopters. Earlier this month a helicopter crash near Houston took the lives of a pilot and photographer working on contract for a local television station. The station aired footage from the chopper just before it crashed.

Meanwhile, a helicopter crash this month in New York took the life of a metro Atlanta businessman. The man had purchased the helicopter less than a week prior to the crash.

Helicopters are prone to the same issues that can cause plane crashes: mechanical malfunctions, poor maintenance, poor weather and lack of visibility, or pilot error can all contribute to helicopter crashes. Unfortunately, also like plane crashes, when a helicopter accident occurs, it is frequently deadly.