The Federal Aviation Administration (FAA) will pay $4.5 million to settle a civil lawsuit filed after a young man was seriously injured in a helicopter crash. A federal judge ruled that the accident was caused by air traffic controller error. The crash occurred when to helicopters collided in mid-air, killing two men in one helicopter and injuring one man in the other. 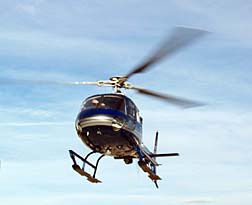 According to the Los Angeles Times, Gavin Heyworth was just 22 when he took a helicopter from Torrance Municipal Airport. He was a former marine who had just returned from a tour of duty and had his whole life ahead of him. Heyworth had decided that he wanted to be a professional helicopter pilot and went out that day to do some training exercises. While he was returning from those exercises, another helicopter was also preparing to land at Torrance Municipal Airport.

For some reason, Heyworth was abruptly told to turn right, which he did. Unfortunately, that move resulted in a collision between Heyworth's helicopter and the other one, which fell to the ground and exploded, killing both men inside. Heyworth's helicopter also crash-landed, although he survived the accident. However, almost every bone in his lower body was broken in the crash. He was put in a medical coma for two weeks and underwent several operations following the crash. His life has changed dramatically since the accident and he says he is no longer able to the things he could do when he was a Marine.

In reaching her decision that the air traffic controllers were responsible for the crash, the judge noted that the controllers did not follow standard procedure and did not properly communicate with each other. She also noted a staff shortage in the control tower contributed to the crash.

In September, the same judge ordered the FAA to pay $4.7 million to the widow and children of one of the men killed in the incident.

More HELICOPTER CRASH News
Meanwhile, the family of a woman who was killed in a helicopter crash has filed a lawsuit against the chopper's pilot, who was also the woman's boyfriend. The lawsuit alleges that the pilot, who also died in the crash, was negligent in flying into a heavy fog. According to the lawsuit, the pilot did not follow federal regulations, did not verify weather conditions and did not change his flight plan when he came upon foggy conditions.

People who knew the pilot say that he had a reputation for reckless behavior and poor judgment. A friend of both victims said it was outrageous that the pilot chose to fly that morning and said he would not have flown even if conditions had been a bit better. However, witness reported hearing the helicopter's engine sputtering before the crash. The helicopter involved in the incident, a Robinson R-44, has been involved in previous lawsuits that alleged it had mechanical issues and fuel tank problems.

The helicopter crashed into a house at around 5:30 am in September. Luckily, none of the people sleeping in the house were injured in the crash.