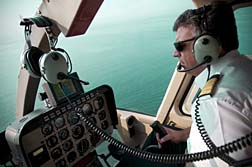 Last month, 2 people died when the helicopter they were in crashed in Missouri. According to witnesses, the helicopter had been operating normally but suddenly went into a nosedive in a heavily wooded area. The men were flying the new helicopter from California to a company in Illinois. They had stopped for fuel in Oklahoma and were on their way to West Plains for another fuel stop when the crash occurred.

Both the Federal Aviation Administration (FAA) and the National Transportation Safety Board (NTSB) are investigating the accident.

Meanwhile, 3 people were killed in a helicopter crash in Decatur County, Indiana. Witnesses reported that parts of the helicopter came off before it crashed. Investigators have ruled out the possibility that the helicopter came in contact with trees or power lines and are now focusing on pilot error or equipment malfunction. The medical helicopter was carrying the pilot, a nurse and a paramedic.

Perhaps the most high profile helicopter crash to occur in recent years occurred above Phoenix, when two helicopters, each carrying a photojournalist and a pilot who was also reporting live, collided. Both of the helicopters were covering a car chase through downtown Phoenix. Luckily, no one on the ground was injured, even though the helicopters crashed into a city park at lunchtime.

A wrongful death lawsuit has been filed in the case, by the son of one of the men who died in the crash. The lawsuit alleges that one of the pilots was negligent in causing the crash and also claims that U.S. Helicopter Incorporated knew or should have known that the pilot was reckless.

More HELICOPTER CRASH News
Helicopters are involved in a surprisingly high number of accidents—as many as 8.09 accidents per 100,000 flight hours, according to Mike Kriebel of the Aviation Underwriters Association. One reason could be that it is difficult to learn anything from previous crashes because voice recorders and flight data recorders are not required on helicopters. That can make it difficult to determine the cause of a crash—and if the cause of a crash cannot be determined than similar crashes cannot be prevented in the future.

Because helicopters can be maneuvered vertically and can hover, they are often used in locations that other forms of transportation cannot be used. This includes being used for emergency medical transportation, for transporting people into remote locations and for sightseeing trips. However, because they can be operated so close to the ground, helicopters are at risk for hitting nearby objects, such as trees and towers.

Because there can be many factors involved in a helicopter crash, it is important to properly investigate the accident, when witnesses can still be found and evidence is still intact.