It was the news no one wanted to hear: the bodies of 10 to 13 people involved in a helicopter crash off the coast of Canada have been found in the downed chopper. Now, more information is being released regarding what may have caused the tragedy. Meanwhile, the families and friends of those who were involved in the helicopter accident are still in shock, trying to comprehend what has happened. 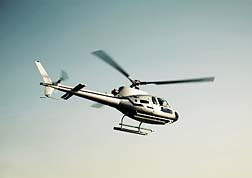 Of the 18 people on board the helicopter only one person was found alive, in stable but critical condition. The survivor, Robert Decker, is being treated for hypothermia, a broken bone and salt in his lungs. His family released a statement that Decker has been revived but was unable to speak and remains on life-support. Officials hope that when Decker recovers he can help them to determine what happened in the moments before the helicopter crashed.

Rescue crews worked around the clock trying to locate further survivors, but were unsuccessful. Now, the work turns to recovery—recovery of the bodies of those who died in the crash and of the helicopter itself. So far, 9 bodies have been recovered from the helicopter. Before the helicopter is raised as many bodies as possible will be removed from the wreck.

Mike Cunningham, lead investigator of the Transportation Safety Board, noted that the helicopter was "busted up pretty good, which would indicate significant impact."

Cunningham also noted, "The cockpit area is very badly damaged and crushed to the point where one might suggest that there's almost nothing left of it."

The Transportation Safety Board (TSB) has identified 13 people believed to have died in the helicopter crash. Initially, rescuers hoped that more survivors would be found because all passengers on the helicopter were given survival suits that could keep them alive in the water for up to 24 hours. Those suits contained locator beacons but none of the beacons was detected following the crash. Two life rafts, which could have deployed either manually or automatically, were found with no people on board.

According to reports, the helicopter crashed approximately 8 minutes after the pilot sent out a distress call. The helicopter, a Sikorsky S-92, crashed approximately 65 kilometers from the shore. The pilot had complained about mechanical problems and turned back toward St. John's when the crash occurred. A Transport Canada aviation database reports that the mechanical problem may have been a main gear box oil pressure problem, but officials note that information is preliminary.

The helicopter was carrying 18 people to 2 oil platforms in the Atlantic Ocean when it crashed off the coast of Newfoundland. Some reports indicate that the pilot was attempting to intentionally crash-land the helicopter because of the mechanical problems. However, officials have noted that the floating wreckage suggest a sudden impact.

Shortly after the crash, an airline flew over the crash site and reported that the helicopter was floating upside down.

More HELICOPTER CRASH News
The Transportation Safety Board of Canada has said that it will attempt to recover the helicopter, which sank after the crash. Specialists from the US have been brought in and told to make every attempt to recover the helicopter. Recovery crews will use inflatable balloons to pull the helicopter wreckage from the ocean floor in an operation that could take up to a week, with recovery of the bodies taking 18 to 24 hours, if everything goes according to plan. Some team members involved in the recovery were also involved in the 1998 Swissair crash, which occurred near Peggy's Cove, Nova Scotia.

Now, the investigation begins, with officials hoping to shed some light on what could have caused this terrible tragedy while the families of those who died in the crash grieve for their loved ones