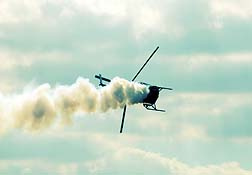 The families of 2 firefighters who were killed on route to a fire in Northern California have filed suits for $10 million each. The suits were filed against Carson Helicopters, General Electric, Columbia Helicopters, Sikorsky Aircraft and United Technologies, alleging negligence, wrongful death and product liability. Two other lawsuits have already been filed by representatives of other victims of the crash. More lawsuits are still expected.

The helicopter crashed into Shasta-Trinity National Forest in the summer of 2008, killing 9 of 13 people on board. The firefighters were on a contract to fight a forest fire in Northern California.

Meanwhile, in a reminder of how deadly bird strikes can be, federal investigators now believe that a bird strike may have caused a helicopter crash that killed 8 people in the Gulf of Mexico. Investigators have so far ruled out problems with the engine, transmission, electrical system or hydraulics. They also ruled out a problem with the rotors.

Investigators, including the National Transportation Safety Board (NTSB), are now focusing on the possibility that a bird struck the windshield, destroying it and causing the accident. According to The Wall Street Journal, sounds captured by the voice recorder indicate a loud bang followed by a rush of wind. A second later, power from the helicopter's 2 engines dropped, the helicopter's airspeed decreased and it ultimately crashed.

The Wall Street Journal article notes that some helicopter operators install acrylic windshields to save weight, but those windshields may not have the strength to withstand a bird strike.

While the NTSB may have found the cause of that plane crash, the parents of a 14-month-old girl who died in an Air Angels helicopter crash in October, for which a cause has not been released, are critical of EMS operations. Comments the girl's parents made have been submitted to the NTSB for consideration during hearings held in February regarding the medical helicopter industry.

"What we have learned since (the Aurora crash), to our dismay and rising anger, is that helicopter EMS operations suffer lapses in operational safety, deficiencies in key safety equipment, lack of essential procedures and lax oversight," the Blockingers said, in a statement published in the Southtown Star. "In this day and age, colliding inadvertently with man-made towers, buildings, bridges and whatnot is inexcusable."

More HELICOPTER CRASH News
The Blockingers have said that they want the FAA to require helicopter companies to enhance pilot training, assign 2 pilots to every flight and equip helicopters with collision-avoidance technology to prevent potential accidents.

The hearings were scheduled after 35 people were killed in helicopter crashes in one year. Although investigators have not said what caused the crash that killed the Blockingers' daughter, it appears that pilot error caused the helicopter to collide with a radio tower on route to Children's Memorial Hospital, killing the young girl, the pilot, a nurse and a paramedic.

The Blockingers have filed a lawsuit against Air Angels. Meanwhile, the families of other victims of helicopter crashes are filing lawsuits of their own, hoping to hold those who are responsible for the crashes accountable for their actions.