In the latest helicopter accident news, yesterday's crash of an ROTC training helicopter is among the most recent helicopter crashes reported—including helicopter accidents that have claimed lives. In this latest incident, one person was killed and four people injured when a UH-60 Black Hawk carrying a crew of five fell abruptly back to the earth after taking off from the campus of Texas A&M University on Monday. 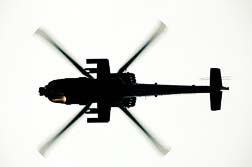 Students at Texas A&M are off on their winter break, and classes do not resume until January 20th. Cadets in the university's Corps of Cadets, the institution's own officer training unit, were engaged in the ROTC Winter Field Training Exercises at the time of the crash.

Witnesses had reported to the Bryan-College Station Eagle that there were 5 Army Black Hawk helicopters performing various takeoff and landing maneuvers throughout the day.
At one point one of the helicopters lifted off from Duncan Field, an open area adjacent to the Duncan Dining Hall on the university grounds.

Suddenly, literally seconds after takeoff, the UH-60 Black Hawk failed, and fell abruptly back to the earth. A witness reported that one of two helicopters he had watched liftoff appeared to suddenly lose control, and start spinning.

"All of a sudden (the helicopter) dropped straight back down into the ground," witness Scott Walker reported to the Bryan-College Station Eagle newspaper.

The university, it was reported, suggested that a rudder on the doomed helicopter might have failed. The investigation is continuing.

The helicopter that crashed carried a crew of 5—four members of the Army National Guard and one member of the ROTC staff at Texas A&M. The latter is a recent graduate of the university, according to news reports.

No names were released. All that is known, is that one member of the five-person crew did not survive the helicopter crash. A spokesperson with the College Station Medical Center revealed that two of the crash victims were in critical condition at hospital, while a third was in stable condition.

A fourth individual was taken to the St. Joseph regional Health Center in Bryan. However, that person's name, and condition were not immediately known.

More HELICOPTER CRASH News
Even though the helicopter crashed shortly after it lifted off from the ground, it struck with sufficient force to litter debris over much of the field area, in addition to two nearby streets.

It was not known if weather played a factor in the crash. Given the suggestion that there may have been a mechanical malfunction with the aircraft, the maintenance records will surely be studied.

Beyond that, is the troubling increase of helicopter crashes. Helicopter accident news is becoming a regular fixture in the media, and helicopter accidents appear to kill, and injure passengers and crew with increasing frequency. Are there more crashes? Or, are we just hearing about them more frequently? Whatever the answer, people who are injured in helicopters, or the families of those who are killed, could be forgiven for not waiting for answers, before calling their lawyers…