The Prepaid Debit Card Takes Advantage of the Disadvantaged

As if the credit card companies and banks aren't making enough already, now consumers who can least afford to pay credit card user fees are being put into an even tighter financial noose while the proprietors of prepaid debit cards, such as Green Dot Visa, are raking in the cash that to some is yet another example of credit card consumer abuse. 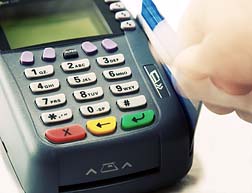 A joint investigation by the New York Times and the PBS program 'Frontline' has exposed the murky user fees behind an industry that is about to mushroom.

Prepaid, pre-loaded debit cards have grown as a natural extension of entities such as prepaid phone cards—and are directed at the 'unbanked' consumer. That is to say, consumers who do not have a regular association with a bank, or don't have a bank at all.

They can't qualify for a standard credit card. They may have lousy credit. And there are an estimated 80 million of them out there.

And so along comes the pre-paid debit card that promises no credit check, or no requirement for a bank account. Just buy it and fly it.

However, as the New York Times / Frontline investigation reveals, the cards come with a basket of user fees that are often hidden in the fine print.

Take the MiCash Prepaid MasterCard, for example. According to an expose appearing this week in the New York Times the new debit cardholder is docked an immediate $9.95 activation fee. And that's just the beginning: use it at the ATM and it costs you $1.75 for each withdrawal. A simple ATM balance inquiry will cost you a buck. There's a 50-cent fee for each purchase, $4 in monthly maintenance, a $2 fee for not using it within 60 days and a buck-a-call to contact customer service.

More CONSUMER FRAUD News
Spokespersons for the prepaid debit card industry maintain that for those without banking privileges, prepaid is less expensive than the fees charged at check-cashing boutiques.

Critics say the cards take advantage of a segment of the population already at a disadvantage.

The Times article tells of one young fellow who turned to a Pay-O-Matic card after a bank turned him down for an account because he lacked one, of two required pieces of ID. His alternative was to park the proceeds of his paycheck onto the prepaid debit card.
It wasn't long before he began to notice the accumulation of fees. It was only when he returned to the Pay-O-Matic store to complain that he was given a detailed list of two-dozen fees.

Beneficiaries such as Visa, MasterCard and Discover earn anywhere from a nickel, to 20 cents each time a prepaid debit card is swiped.

And for what? That's what consumer advocates are asking.