Ford Hit With Largest Single Recall Yet in US History

The automaker that beat the odds and charged through the US economic morass on its own steam has been hit with the largest recall in US history. It will be interesting to see what affect this has on an automaker that said "no thanks" to a federal financial bailout earlier this year and whether this recall was a total surprise, or they knew it was coming. 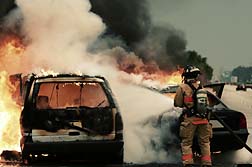 On Tuesday Ford announced that 4.5 million vehicles have been recalled due to a faulty cruise control switch that could lead to a fire. And while the 4.5 million is staggering, the number pales when compared to the 16 million Ford vehicles that have been recalled in total over a faulty deactivation switch. This latest recall is the eighth such action with regard to Ford cruise control.

All of the recalls involve a cruise control deactivation switch manufactured by Texas Instruments and used in Ford vehicles prior to 2003. According to the National Highway Traffic Safety Administration (NHTSA) failure of the switch can lead to a hydraulic fluid leak which can overheat, smoke and then burn. A fire could happen even when the ignition is turned off and the vehicle is parked and unattended.

Of the 4.5 million vehicles recalled Tuesday, 1.1 million of those are Windstars.

"We determined with the government (via an investigation) that there is a low risk of fires for those vehicles," said Wes Sherwood, a Ford spokesman. "The other 3.4 million vehicles are the remaining vehicles that have the Texas Instrument switch, so we're recalling them to reassure customers and prevent future recalls."

The recall is still a couple of weeks out, with a start date of October 26th. The NHTSA urged Ford drivers to look for warnings of possible imminent fires, including any malfunction of the following: cruise control systems, brake lights or antilock braking system, also brake light warnings on the dashboard. The safety agency also said difficulty in getting the vehicle out of 'park' should be treated as a warning.

If you have already suffered property damage as the result of a fire that may be tied to the faulty cruise control deactivation switch, you are urged to contact a qualified attorney.

If you have suffered losses in this case, please send your complaint to a lawyer who will review your possible [Ford Recall Lawsuit] at no cost or obligation.
Request Legal Help Now