Those who can't get through the day without their PB & J may be facing another hurdle—not managing to venture too far from the bathroom, after a peanut butter salmonella scare has rocked the food world. A peanut butter recall was announced yesterday after salmonella in peanut butter was found in products distributed by an Ohio company, and health authorities in Minnesota linked the contamination to a wave of salmonella infections across the state. 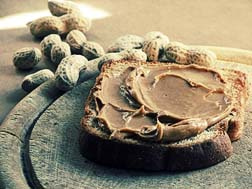 King Nut Cos. of Salon, Ohio distributes the creamy peanut butter under its 'King Nut' and 'Parnell's Pride' brands—and while the product is not distributed at the retail level, King Nut has sufficient presence in universities, restaurants, hospitals, nursing homes and other institutional food services to warrant a recall, and concern with regard to the sickening of more than two dozen people in Minnesota.

The US Food and Drug Administration (FDA) is not prepared to link the King Nut peanut butter salmonella discovery to a national outbreak of Salmonellatyphimurium that has affected hundreds of people in 43 states. In an email to WebMD, FDA spokeswoman Stephanie Kwisknek said there is "insufficient information at this time to conclusively link this King Nut peanut butter product to the national outbreak" of Salmonellatyphimurium.

However, health officials in Minnesota have flagged the peanut butter as "a likely source" of salmonella contamination that has stricken at least 30 Minnesotans.

King Nut, which is only the distributer, has recalled all of its King Nut and Parnell's Pride peanut butter with lot codes that begin with the numeral '8.' King Nut has also cancelled its orders with Peanut Corporation of America.

It has been reported that a woman in her 70s who had become infected with salmonella died—however state health officials could not say what role the salmonella contamination might have played in the woman's demise, or if other medical issues might have contributed to her death.

However, it was reported in the Wall Street Journal this morning that genetic tests have verified the link between the salmonella strain found in the container of peanut butter, and that which has been prevalent with the national outbreak. It was noted that health officials in Minnesota focused on the peanut butter after finding that every one of the 30 Minnesotans who became ill had eaten peanut butter, and the "overwhelming majority" ate the King Nut brand, according to Doug Schultz of the Minnesota Departments of Agriculture and Health.

For its part Peanut Corp. of America has said that it "is cooperating fully with US government agencies and independent laboratories in this investigation." Meantime Martin Kanan, the president and chief executive of King Nut said in comments published in the Wall Street Journal this morning that "there's no way" his company caused the outbreak, given that it shipped product to only 7 states. "If we are part of it, we are not causing it," he said in comments posted in the January 13th issue of the Wall Street Journal.

More FOOD & SUPPLEMENT News
The Centers for Disease Control and Prevention (CDC) in Atlanta was reported to have observed that several states noted people became sick after eating at schools, hospitals and other institutions where King Nut is the only brand of peanut butter served.

The CDC did not say how many states (and if those states were limited to 7) reported that finding.

Meanwhile as the investigation continues, including what role(s), if any the manufacturer and / or the distributor may have played in the outbreak, the fact remains salmonella illness is an awful thing to become stricken with, and is more serious for the elderly, the very young, and for those with weakened immune systems. While the peanut butter recall gets the product out of circulation, such a peanut butter salmonella scare could prove a problem for many. And any individual having come in contact with salmonella in peanut butter might be well advised to contact a legal professional, to explore your options.

If you have suffered losses in this case, please send your complaint to a lawyer who will review your possible [Food & Supplement Lawsuit] at no cost or obligation.
Request Legal Help Now